Deep in the heart of Gielinor a second war of the gods rages on. As each faction fights to defeat the other and accomplish the mission they set upon, adventurers have made their way into the battle and began to challenge the generals of the gods in hopes for new weapons and armour. One of these generals is the general of Sliske called Gregorovic, a man who wanted to become more powerful and was made so by being killed and resurrected by Sliske. For those that kill him there is a chance to obtain his weapons, the shadow glaives.

Deep in the heart of Gielinor a second war of the gods rages on. As each faction fights to defeat the other and accomplish the mission they set upon, adventurers have made their way into the battle and began to challenge the generals of the gods in hopes for new weapons and armour. Two of these generals are the generals of Zamorak called the Twin Furies. They are set on defeating Gregorovic who ate their sister and to get revenge for her. This weekend we will be taking the fight to them for a chance to obtain their armour and weapons. Will you join us?

The time has come for you to choose your path for the god you are willing to fight for. Will it be Zamorak or will it be Saradomin? Perhaps you will let Guthix choose your fate! Nevertheless it’s time to grab your Ring of Duelling for a good old fashioned game of capture the flag in one of Runescapes most popular mini-games: Castle Wars.

In an effort to make things on the development end of the site more known, we're going to be making one or two dev blogs every month. This will give a BTS look into what's actually being done to help our site become more modern, useful and safe for our community to use.

In short, this year has been eventful to say the least. We've went from an old server with a lot of bells and whistles that we didn't need, to a newer server that offers some better DDOS protection and more modern security over the old one.

During this transition, however, some unforeseen issues arose that took a good 15 days to resolve and get things running. To be honest, we're still recovering from this on the back end of things in regards to getting everything working properly the way it did with the old server. Running a newer php version tends to break things, but we had no choice but to move servers in a quick manner. We wanted new servers and wanted to take our time, but sometimes things get out of your control... and this is one of them.

The new forums was also a development decision. While we never wanted to make our community restart, there were so many custom things on the old forums that... just didn't work with the newest version of the software that had enhanced features and better security - not to mention the bugs, oh the bugs, associated with the old forums. This wasn't a decision made light-heatedly, but the feedback on the sleeker and improved forums makes us feel we made the correct decision.

Server down time, this has been an issue since we moved to the new server... and as of this last server hardening and configuration changes, we are hopeful that this won't happen again. We've removed the code that was causing the crashes and hardened the way our code interacts with the server and database so that things load faster and more reliably than ever.

Finally, onto what's been happening code wise, since the past four or five announcements in the dev area has just be server or database related (which doesn't leave much to fixing, improving or adding features to the existing site)... because isn't that what the main concern of the Dev team is?

Yes, this assumption is correct. However, our developer admin whose doing most of the code work has been preoccupied with server and database maintenance, as well as working with all the other teams on improving our staff practices and community engagement.

After the coming holidays, the development team will begin focusing their work on "RuneHQ 2.0". This project is starting the RHQ site fresh. Which means new and improved features. Making things less clunky. Using newer, more modern technologies and, of course, redesigning the layout a bit and taking a new approach in the way things are laid out and displayed. With the emergence of RS Mobile, our team is also beginning work on making the site mobile friendly so that everyone can easily access, view and use our content.

We're hopeful that we'll have a beta for the new site ready for testing during 2019, but there's still quite a bit of work left to do.

In a cold stronghold where the last of the followers of Bandos resign behind a strong gate. Only the most brave, fearless and strong adventurers will have the courage to enter this huge stronghold of Bandos. They will be risking their lives in one of the most dangerous places in all of Gelinor. Those who enter and kill the last remaining general of Bandos, general Graardor may find pieces of the sacred Bandos Godsword or tassests and a chest plate of Bandos that provide strength bonuses to warriors. Are you brave enough to enter the Bandos stronghold and claim the great riches if you are to survive? 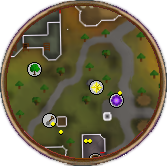 Have you ever wanted to make a difference on RuneHQ? Now is your chance, we are currently hiring!