0038
Treasure Trails
Description:
So, you got your first clue, congratulations. Now you must be off to get your treasure! Remember sometimes when the clue gives a coordinate, you get to the place, realizing that you forgotten to bring your watch or chart? Never fear, with this comprehensive guide, what you need to bring is all listed here.

- RuneHQ Content Management -
Quests Required:
Varies between clues.
Items Needed:
For any type of Treasure Trail activity, you will need to carry the Clue scroll. If you die and lose the clue, then you cannot get it back. You will have to try to get another one. You can only have one clue at a time, either in your bank or inventory.
For Coordinate clues, the following is necessary: a Watch, a Sextant, a Chart, and a Spade.
For Emote clues, each clue will specify what items are needed to be equipped.
Skill Levels Recommended:
Items Recommended:
Starting Point:
Varies due to the variety of each clue. Search this guide to find where your particular clue starts.
Is this MiniGame Safe to play?:
No
Getting Started:

You can enter your coordinates and get a customized map (with nice red cross-hairs on your specific location) by using the World and Coordinates Map.

Where to get the items needed to do a Coordinate Clue:

How to complete coordinate clues on your own

This next section will you help you to become a master at figuring out coordinate clues without help from anyone!

How to figure out the coordinates:

An example: Let's say you have the coordinates 07 deg 00 min N, 00 deg 39 min E. This means you have moved to a location north and slightly east from the observatory. Each square on the Runescape ground is two numbers higher or lower from the adjacent squares depending on in what direction you move. This picture shows the location of a square at the Tree Gnome Stronghold gate.

If you get a coordinate that says, for example, 05 deg 14 min South, 12 deg 03 min East, it means the location is somewhere on the lower half of the plus sign, to the east. It's all about adding and subtracting, yet no major math is involved.

How to use the sextant:

Your goal is to get the horizon and sun in the middle of the center piece.

Click "Get Location" to get the coordinates for the square you are standing on.

* A Zamorak wizard will appear during Wilderness and Level 3 (Hard) clues. Kill him and then dig again to get a casket.

* A Guthix wizard will appear during Level 4 (Elite) clues. Kill him and then dig again to get a casket.

The following basic technique will help you solve any of the puzzle challenges given to you. The general idea is to start at the top and work your way to the bottom of the puzzle. You only need to learn the order of the pieces and get them in in that order. The first piece correctly placed must be Red 1 (as marked in the image above), then Red 2, and work your way to Pink 5. Getting each section in order is becomes more difficult as you work your way to the end. If you happen to mess around with the puzzle making it unsolvable, then log out and start again. 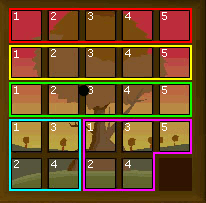 If you can follow this technique successfully, the puzzle almost solves itself. If you are having some difficulties getting pieces in the correct order, then here are some tips to help you follow the technique laid out in the previous section.

There is no way you will get 4 and 5 in place unless you do them together, consecutively. You have Red 1, 2, 3 and 4 in position. Unless you have the black space available, where 5 is meant to go, you cannot get 5 in without moving 4. Therefore, you need to move them both in together. This may seem very obvious but is the hardest step of a puzzle, especially near the end. Here is an example. 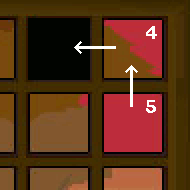 Here are Blue 1 and 2. Once you get to this stage it is becoming easier to solve the puzzle. However again, the position shown is essential. Moving pieces around lots of times, often helps. Do not stick to moving only the pieces you need to place, move every unplaced piece. 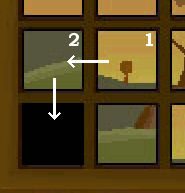 Sometimes it is worthwhile, to move pieces that you have already placed correctly according to the basic technique. Sometimes this is necessary, so that you can place the blue and pink section correctly. Do not let yourself get too far backward though. Just start by undoing one piece at a time to help you. You should only have to move a couple of pieces to give yourself room to maneuver. When working in the blue and pink areas, think of putting the pieces in the correct order by rotating clockwise or counterclockwise.

To increase chances of getting a clue, a Ring of Wealth may be used. Your best chance however is to just find a good area for whatever enemy it is that you are killing, and hope there isn't a lot of people in that area. Mystery boxes from Random events have the chance to give easy, medium or hard clues.

There are a lot of solutions in this guide, and you might not even find yours if you are looking manually. Simply use the "CTRL + F" feature and search for keywords. For example "halt us" or "under cook."

I. Speak To Clues

These clues are in the form of 'ABC 1234', with 'ABC' meaning the Fairy Ring code, and '1234' meaning how many spaces you must move to dig. The numbers correspond to the Compass (NESW), also easily remembered by the Elementary School saying "Never Eat Soggy Waffles".

In this specific case, this clue would mean that you must put ABC in the Fairy Ring code screen, which would teleport you to that area. From the exact point of landing, you would move 1 space North, 2 spaces East, 3 spaces South, and 4 spaces west.

Below is a list of all clues relating to this.

These clues will require you to perform one of the many emotes at a specific location while also equipping 3 specific items. You can also be equipping any other items but you must have at least the 3 specified by the clue. When you perform the correct emote while equipping the correct items, then Uri Molotov will appear and give you the next clue or casket.

The table below lists the emote clues along with the specific locations and items needed for the clue. There is also a list of some of the ways to obtain the items. Of course, if you don't want to make the items yourself, you can always purchase them from other players. In any of the clues that tell of a Double Agent, you will need to fight a look alike of Uri Molotov. The Double agent level for clues leading to the wilderness will be level 65 and for clues that lead to all other areas, it will be level 108. After you fight the Double agent, you will need to perform the emote again and Uri Molotov will appear instead.

These are enemies known to drop clues. It is also possible to get a clue from a Mort'ton dungeon chest (see the Shades of Mort'ton Quest Guide for initial info).