0443
Slayer
Introduction:
Slayer is a members-only skill, however Free-to-play players can level it up to level 5 through tasks assigned by Turael. Slayer involves being assigned a task to kill a certain number of creatures by Slayer Masters.

The difficulty of the creatures you must kill depends on the Slayer Master. With this skill you unlock the ability to kill Slayer Monsters, who commonly drop more valuable items.

Slayer is a skill wherein a Slayer Master assigns you a certain number of a creature to kill. Once given your task, you will be expected to complete it either solo or with a partner.

If you choose to, you can enable a counter to display your current Slayer/Reaper task, your Slayer/Reaper points, and your current task streak - or just the number left in your assignment. This interface can be expanded or condensed by Right-clicking and choosing "shrink" or "expand". This is also how you toggle between your Slayer and Reaper task display. To enable this counter: go to your Options (gear icon), Settings, Skills tab, and find it under Slayer; it is the dropdown box along the top.

Several Slayer monsters have the ability to force a task to be assigned by a Slayer Master. This is done by wearing a special mask when you go to get a new task. Note that only a slayer master that typically assigns this creature can be forced to assign you this task; for example you cannot force Morvran to assign Crawling hands because they are not normally assigned by him. It is possible to check how long until you can force a task again by right-clicking the mask and selecting "Check Kills".

While wearing the mask the following bonuses apply...

Once you have reached a certain amount of kills while wearing the mask (the amount varies), it will become a helm. At this point it will retain similar benefits, but no longer provide bonus experience, extra damage, nor double drops. You can choose to have it appear as the mask or helm as well. It is possible to reset your number of kills on a Helm by using a Spirit of Battle on it.

*Cooldown is shared amongst these masks/helms.
+You will need to unlock the ability for this Slayer Masters to assign these tasks (toggled in the Slayer Master Rewards menu)

Various monsters can be substituted for another variety of their kind and count toward your current Slayer task. For example, Giant bats can be killed in place of regular Bats, or Brutal green dragons can be killed in place of Green dragons, etc. If the substitute has a higher Combat level than the assigned monster, the player will receive more Slayer and Combat experience for the task.
Note that monsters found inside a Player-owned house will not count towards a task.

Please see our Slayer Monster page for a full list of Slayer monsters in Gielinor.

In the dungeons of Daemonheim, there are certain monsters that will require a certain slayer level to kill. They all have unique item drops, and these items have their own uses. The higher the slayer level, the more useful the items will be to you.

Several items can increase your chances of receiving improved drops from certain Slayer Monsters. Note that tiers 1, 2, and 3 will only increase drop chances for the monsters listed; tier 4 will increase the drop chance for everything on the table.

When you are sent to kill any regular type of monster and aren't sure where to find it, check RuneHQ's Monster Database. However, there are several sites with a concentration of the Slayer Masters' favorite monsters, which are also listed in the Slayer Monsters Table above.

Slayer points are awarded upon completion of your 5th and every following task. The amount of points awarded depends upon which Slayer Master assigned the task (see table below). You are allowed to mix and match between Slayer Masters e.g complete 4 tasks for Chaeldar and then your 5th task for Duradel. This way you will receive the points Duradel normally grants after 5 of his tasks. If you are using this method to obtain more Slayer points, do not use Turael/Spria as they reset your counter to 0.

The table below outlines the points awarded by each Slayer Master upon completion of a task (note that you will only receive half of the full points reward until you have completed Smoking Kills).

These Slayer points can be used to buy Slayer items, learn new techniques and how to make special equipment and cancel or permanently block tasks of your choice.

Your first option is to cancel your current task for 30 points. The second option grants the choice of never recieving a monster as a task ever again. The number of monsters you can add to your "Block" list is determined by your quest points. You need 50 points to ignore 1 monster, 100 points for 2, 150 points for 3, 200 points for 4, and 300 points for 6. 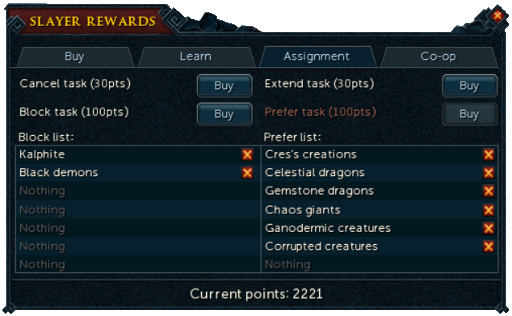 After completing several tasks in a row for a single Slayer Master, they may offer you a special challenge. They will reward you with a chunk of experience and Reward Points if you manage you successfully complete it. Should you choose to no longer be offered these special tasks, you can check the 'don't ask me again' option when you decline it. This can later be re-enabled via dialogue options with the relevant Slayer Master by asking about special assignments. The challenges for each master are:

Turael/Spria has constructed a basement and filled it with monsters. They want you to enter the dungeon and kill all of the monsters inside in one visit.

Vannaka requests that you bring him a perfect dragon scale from each of the chromatic dragons (Green, Blue, Red, and Black). Note that both adult and baby dragons drop the scales and it may take several kills to obtain one. Once you have all four, return to Vannaka.

Chaeldar has developed an experimental fungicide spray that she wants you to test on 10 Mutated zygomites and return to her with the results. First get the Zygomites down to low health and use the spray on them to see the effects which include instantly killing the Zygomite, enraging it and therefore restoring some of its health and increasing its Attack speed, or healing it completely. Once you've tested the spray on all 10, return to Chaeldar.

Sumona simply wants you to kill the Kalphite Queen to complete her challenge. You may bring a partner to help you, but must deal the majority of the damage yourself.

Duradel or Lapalok wants you to kill every single monster in the Morytania Slayer Tower in one visit. This consists of:

Kuradal will ask you to kill all 280 monsters in the TzHaar Fight Caves, up to and including TzTok-Jad. Note that if you die, the killcount will not reset and you will not receive the full reward if you try again and kill your 280th TzHaar before reaching Jad.

Morvran needs you to retrieve several lost fragments of the goddess Seren by killing the following bosses on your own and returning the Dark crystals to him:

Note:You can also start this challenge by spending 100 slayer points per week to get this special task assigned to you.

Reward: 50,000 Slayer experience, 45 Reward Points, A free re-tune of a Max Guild portal, and increases the cap which you can obtain black crystals per task by one.

Mandrith's Slayer Challenge is to kill 15 of each of his possible slayer task monsters. Additionally, you may kill each of the wilderness bosses for an additional reward.

Laniakea wants your help gathering 4 vials of poison from Vile blooms. She asks you to kill one of each type of Vile blooms: Lampenflora, Liverworts, Luminous snaggler, and Devil's snare. The vials are not items and are automatically collected. After each vial is collected you will receive a chat box notification stating it was collected. Speak with Laniakea to finish the challenge.

If you wish, you can do Slayer tasks with friends. This opens up a lot more options when it comes to tasks and quicker methods to get them done. Combat experience and Slayer experience is not shared between you and your partner, but that makes up for the benefit of the finishing your task faster. There are some requirements to use this function though:

To set up a group, right click on your Slayer gem and go to the Co-op options selection to invite your partner. 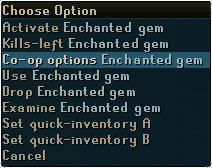 As you finish tasks, you will gain 1 co-op point which goes towards the Social Slayer shop located on the last tab of the Rewards section on any Slayer Master. The amount of slayer points you gain while doing co-op slayer varies depending on how much you contributed to finishing the task.

By talking to Markus outside of the Slayer tower, you can receive a Slayer contract. These are special assignments based around the monsters in the tower that award either combat experience or money and 20% more Slayer experience per kill than you would receive if killing the monster during a standard assignment. You can choose between a normal and special contract, with special contracts requiring you to kill more monsters, but awarding more experience or money upon completion. These assignments can be done during a task or separate. 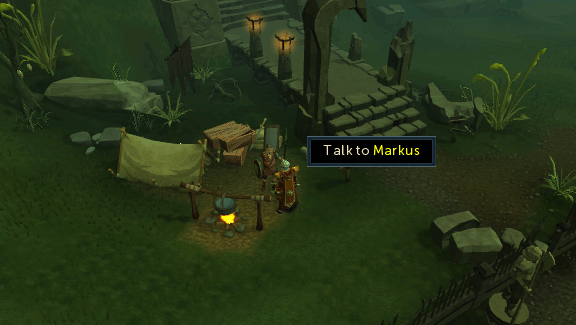 Once 99 Slayer is obtained you can talk to Faiza to obtain a Slayer codex. This allows you to collect souls in an Ushabti and add them to the chest in the Sunken Pyramid or add them to your Player-Owned Dungeon.

If you are looking for more of a challenge, you can take on a task assigned by Death. Please see our Soul Reaper Special Report for more information.

For more information on how to boost your level, see the Temporary Stat Leveling Techniques special report.

Once you have achieved level 99, you may visit Kuradal, in the Ancient Cavern, to purchase a Slayer cape for 99,000 Coins.

Once you have achieved level 120, Kuradal will sell you the Slayer master cape for 120,000 Coins.

Note that as of December 2018, another one of Mod Daze's Easter Eggs have been found. This enables you to purchase a Skillcape for half price (only from Kuradal, not Elen) if you are wearing a Ring of Charos (a). Be aware that "Half price" is 92,000 Coins as the experience at level 92 is approximately half way to level 99.