Its always a good time to take a break from all the non-stop killing and take a step back to enjoy the slower things in life, like skilling! We encourage you to bring items like pulse cores, if you have them, to boost everyone's gains!

We at RuneHQ would like to personally congratulate the following members of our community for their fantastic achievements the past month:

Curious on how your achievement can appear on the front page? Simply share your Accomplishment(s) or awesome Boss/Skill pet drop(s) on the forums and at the end of the month we will share a recap of the month's gains.

Deep in the Heart of Gielinor a second war of the gods rages on. As each faction fights to defeat the other and accomplish the mission they set upon, adventurers have made their way into the battle and began to challenge the generals of the gods in hopes for new weapons and armor. The general of Sliske is Gregorovic - a man who wanted to become more powerful and was made so by being killed and resurrected by Sliske. For those that kill him again there is a chance to obtain his weapons, the shadow glaives.

For more information about this boss, see here.

This trio of queens still reside beneath these ancient ruins! Do you have what it takes to take on these ancient dinosaur queens?? Maybe if you are lucky you will have the chance to grab some spear pieces from the ground. We hear Laniakea is interested in these as well. 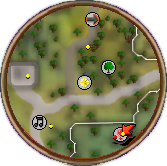