Deep under the Barbarian Outpost, there are foul creatures called Penance monsters. The barbarians have been trying to fight off the Penance creatures, but their efforts have not been very effective. They need more strong adventurers to come help them defeat the Penance monsters and ultimately taking down the Penance Queen. This can only be done with a team where everyone is doing their part and working together. If we defeat the Penance creatures, the barbarians may reward us with Honour Points which can be spent to from things like special armor to re-coloring your weapons! 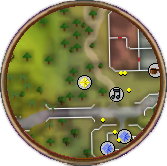