0888
Varrock Museum
Introduction:
RuneScape is an ancient world, created thousands of years ago. The many races and cultures that now cover it haven't always existed, and many that once were are now gone. The Grand Museum of Varrock has always been on the lookout for ancient artifacts of long gone times, and it has recently spent a great deal of its annual income on creating a (nearly) complete history of every event and culture that has ever been upon RuneScape. Since the Museum's workers are too busy taking care of the Museum itself, they are unable to leave and acquire new information. Therefore they rely greatly on the information supplied by helpful adventurers.

There are many different personalities in the Museum, and many of them offer rewards if you help them out.

Museum Kudos are the reward for helping out the Museum. In recent months the Museum's specialist field archaeologists have discovered an ancient island, largely untouched since the God Wars, positively littered with the remains of long-dead species. If your Kudos are high enough (100+) when they finish building a safe passage to the island, you may well find yourself invited to share your expertise. To see how the construction of the barge and canal is getting on, head over to the land just north of the Dig Site.

There are five ways to earn Museum Kudos:

The current maximum amount of Museum Kudos is 198. Your Kudos are displayed in the top right corner of your screen when you're inside the Museum. The Information clerk on the main floor will reward you in certain skills after you receive Kudos. (Smithing, Hunter, Crafting, Prayer, and Slayer.)

In order to earn kudos by means of archeology, you need to have completed The Dig Site quest. Get Leather boots, Leather gloves, a Trowel, a Specimen brush, and a Rock pick from the tool case in the Dig Site cleaning area. Take an Uncleaned find (you may only hold one at a time) from the Dig Site specimen rocks and use it on a specimen table.

Doing this will reveal the item inside. Certain items, listed below, are valuable and when shown to the archeologists they'll tell you to add them to a display case.

Most items aren't valuable and you can either give them to an archaeologist for 5gp or put in a Storage crate for a random item (ores, bones, fletching items, weaponry, coins). Putting items in the Storage crate might also reward you with an Antique Lamp that gives 500xp.

You will be rewarded with 10 Kudos for rare specimens. The specimens considered rare are:

While cleaning specimens, you may also find a Clean necklace. Show this to one of the archaeologists and they will teach you how to enchant Ruby Necklaces, giving them 5 teleports to the Dig Site.

You may also accidentally destroy the rock. If this happens just take another from the pile.

After completing certain quests, you can give Historian Minas information about them. He'll reward you with Museum Kudos (5) and sometimes an Antique Lamp. In total you will receive 75 Kudos and 13k XP from the History section of the Museum.

Quests that you can earn Kudos from are:

Mr Mordaut is found in his office through the door behind the basement stairs. Talking to him about the Dragonkin will award Kudos. To receive the full amount of Kudos, you must have done the following:

Upon providing Mr. Mordaut with the related Dragonkin information, he will give you a Dragonkin lamp which awards 25,000 Slayer XP.

Speak to Orlando Smith in the basement of the Museum, and agree to help him by taking the quizzes. Now, read the plaque beside each exhibit and answer the questions on each creature. You'll need to get 3 questions right to earn Kudos. Don't worry, if you a question wrong you can simply be asked another one. Answering all the quizzes will reward you with 28 Kudos. The natural historians walking around in each area can tell you more about each creature. Once you have answered all the quizzes, go back and talk to Orlando Smith for 1000xp in Slayer and Hunter.

Also, once you reach 100 Kudos, the Museum promises to invite you to the recently discovered island, once the canal barge is complete.

On the top floor of the Museum, you will find a Mysterious cape surrounded by a red rope and guarded by a Museum guard. This is the Completionist cape. You can investigate the cape to see how many of the requirements you have left to complete and if you have completed them all, you can purchase the cape from the guard for 5,000,000 coins. 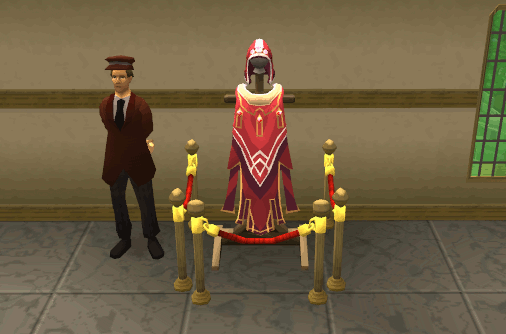 The full list of requirements for the cape is as follows: