1025
Menaphos Reputation
Introduction:
Reputation is gained by performing actions in and around Menaphos. Below is a list that briefly explains each method that can be used as well as what you gain by collecting reputation.

When skilling in Menaphos you may notice that you gain more than just skill points, you are also gaining reputation. This system is unlocked upon completion of The Jack of Spades and is necessary in order to complete the remaining quests in the area.

When first gaining reputation, you will gain City reputation as well as reputation for your chosen district. To choose a district, you can open the information and selection window by clicking on any one of the icons on the Reputation meter. Choosing the Menaphos icon opens up to the overview and city section while each district icon will take you to their specific information tab. Or you can right click on your chosen district in order to make it active. You will know a district is selected when the progress bar is outlined in gold and there is a star next to the icon (See the Worker icon in the lower right corner of the above image or the Port icon in the image below for reference). 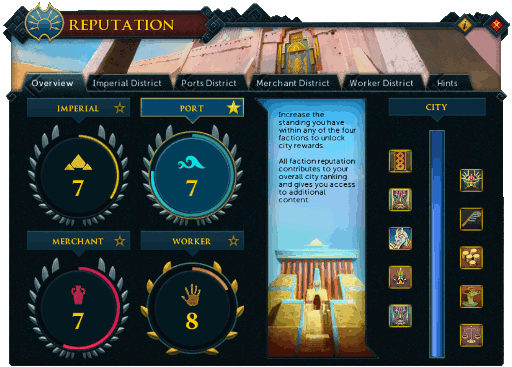 Note that you can change your chosen district at any point in time; it is your choice on where you would like to gain reputation. You can gain your reputation all in one chosen district or you can choose to alternate between districts as you gain tier levels like you see above.

If you are curious about how many points you have to gain to the next tier or you forget which tier you are currently at, you can hover your cursor over the completion bar or the district icon respectively to find out.

While in and around Menaphos, there are several methods to gain reputation. Some of these methods can be done multiple times, some can only be done once, and others can only be done for so long each day.

Menaphos quests provide a small boost in reputation rate after completion of each quest.

Throughout the day, a soul obelisk will occasionally spawn and last for 7minutes and 30seconds before disappearing. During this time, you can interact with the obelisk to gain: 85 reputation, as well as Runecrafting and Prayer experience every 5 ticks; if you do not have at least 50 Prayer, you will gain double Runecrafting experience. However, as you are gaining this reputation and experience, you are losing Life points. 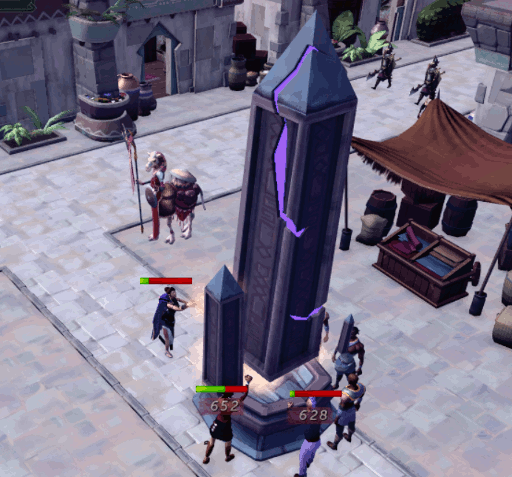 
The amount of damage you will endure per hit will vary depending upon your levels, going as high as almost 700 Life points. Due to the damage received, it is recommended to bring your Enchanted excalibur and food, or to bring runes to cast healing spells (Lunar spellbook). Placing the food on your hotbar will make it so consuming it does not interrupt your interaction with the obelisk. Another alternative, once you have gained the bank chest reward (tier 6) for the district (excluding Ports as it is too far away), you can choose to leave the obelisk momentarily and stand near the bank chest to heal fully before running back to the obelisk and interacting with it again. Note that it IS possible to die at the soul obelisk! If you are wearing/carrying items, you will visit Death and be given the option to reclaim your items. If you are not wearing/carrying any items, you will respawn in the Menaphos plaza.

Because you can gain so much reputation very quickly, this method is capped at 20,000 reputation each day (resets at 0:00 game time). You will need to visit more than one obelisk to achieve this. Obelisks are easy to 'spot' when you are skilling in Menaphos as there will be a chatbox announcement telling you where it is located. Another option is to join a friends chat that calls obelisk locations.

Obelisks can spawn in any one of these four locations.

Similar to the spawning obelisks are agitated scarabs. These pests will spawn just outside the Shifting Tomb entrances in all four districts as well as outside of the Sophanem Slayer Dungeon. Your mission here is to step on them, squishing them and ridding the area of their corruption. Because they spawn next to the Shifting Tombs entrance, it is possible to squish all that you see then step into the Tomb before reemerging and squishing more; repeating until they vanish or you tire of the process. Your other option is to use the quick travel option to cycle through each district. 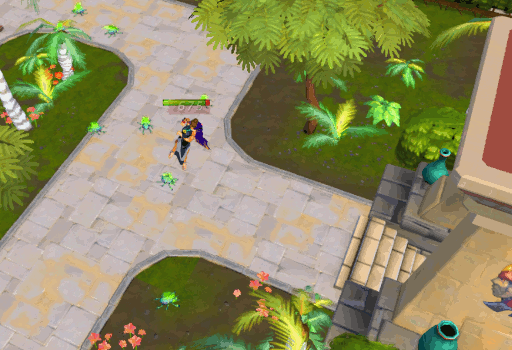 As with obelisks these will last several minutes (5 in total) and when interacting with them, you will gain reputation and Slayer experience, but at the cost of your health. Occasionally you may even be lucky enough that squishing one rewards you with coins (usually 200-500, but as much as 87,590) or a small star.

Unfortunately, the amount of reputation and experience you gain per scarab decreases depending on the total number of scarabs you have squished that day (resets at 0:00 game time). The base experience gained for squishing a scarab is similar to that of a small star divided by 5; Therefore, at most, you can gain 1,720.4 Slayer experience per scarab - if you are level 99+ and you have not squished 25 scarabs for the day yet.

If you prefer to go a more miniquest route, you can complete City Quests. In order to begin, you will need to talk to Urluk to see if he has heard any rumors about active City Quests. 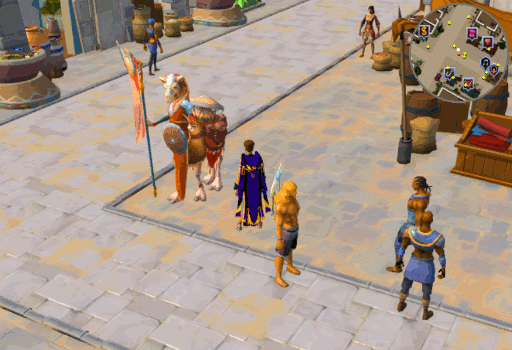 Note that this is merely an example for Imhapi. Each person will have these indicators in their specific location.


The people whom he could suggest you speak to include Coenus, as well as:

Speak with your contact and they will ask you to assist them with something. When you have completed the task, return to them and talk to them again as they will ask for your help with 3 different tasks.
These tasks include:

Once you have completed all 3 tasks assigned by your contact, return to them for the last time. You will now receive your reward, 2,000 reputation for the district you are currently aligned with, as well as a small, medium, or large Menaphite gift offering. It is also possible to receive one of the Menaphite jewels (Hauyne or Idocrase) if you have not yet discovered it, Slayer VIP tickets, and a few Slayer reward points or skill experience depending on which tasks you performed.

If you choose to cancel a task, the ENTIRE quest will be canceled. You will have to complete no more tasks for that person and you will receive no reward. You will then need to wait before you can speak with Urluk start a new quest.

The following items, some gained from quests and others from activities, can be redeemed for reputation:

Another long-lasting method to gaining reputation is by playing Shifting Tombs. This is a 1-5 player minigame that lasts 5 minutes. It can net you up to almost 670 reputation, for your current faction, per game.

It also gives you the experience in up to 8 skills (Agility, Prayer, Thieving, Runecrafting, Construction, Crafting, Dungeoneering, & Divination), as well as the possibility of finding a small Menaphite gift offering, Feathers of Ma'at, the Khopesh of the Kharidan or its off-hand variant, Memory strands (only if Divination is activated), Corundum (Jewels of the Elid), Bestopet (Cats of Menaphos), and Camouflage fragments. 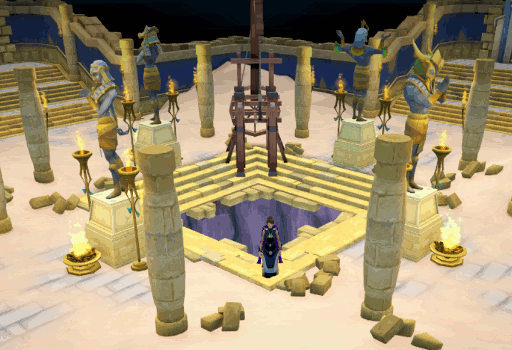 Please see our Shifting Tombs minigame guide for more details on how to play.

Each tier that you increase will change how they view you and what rank "title" you earn.