Beneath Waterbirth Island are 3 legendary kings. Those brave enough to venture down to their lair have the chance of earning great wealth with the possibility of receiving one of the following drops, unique to the kings:

You need at least 3 people to kill the Dagannoth Kings efficiently and without trouble. It is recommended having 1 person using magic and 2 people using range and melee (1 of which on lunar). It is possible to go with 2 people but you won't be able to kill all 3 of the kings and you have a STRONG chance of dying. Do NOT go with people you do not trust with expensive items! Only go once your team has agreed to split all expensive drops.

One of the range/melee hybrids in your team should have 84+ magic and be on the Lunar spell set, it's not essential but assists greatly as explained later in the guide.

These are the ideal combinations, but if you don't have it all then replace it with the next best thing, eg crystal bow for rune arrows and magic short bow. Make sure all potions are (4), unlike in some of the pictures.

Equipment and Inventory for range/melee hybrid: 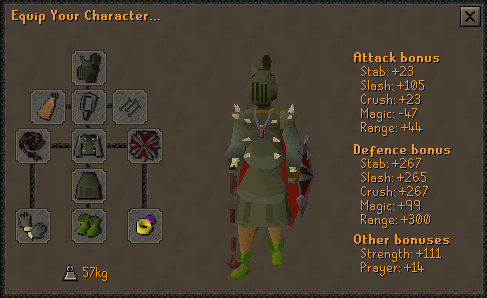 Veracs for the prayer and defence bonuses, Karils top for the range bonus.

If everyone in your team has guthans, then take that instead. Replace the Veracs items with Guthans, leave the Karils top, get rid of Osbidian shield and whip and use spear with body in inventory. 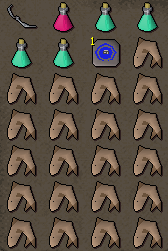 Not much explanation needed here. If on Guthans, take extra potions as you'll be lasting much longer. 10 prayer potions should be enough and 3 super anti-poison.

Equipment and Inventory for range/melee hybrid on Lunar: 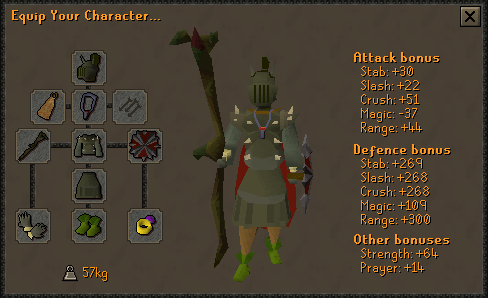 Mud staff for casting boost potion share and teleport group to Waterbirth Island. Can be replaced with mud runes. 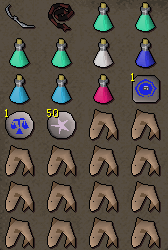 Super potions and range potions are to be shared with the 'boost potion share' spell. Law rune is for telegroup to Waterbirth Island, this is optional but it saves a good 5 minutes. If on Guthans, take extra potions as you'll be lasting much longer. 10 prayer potions should be enough and 3 super anti-poison.

Equipment and Inventory for magician: 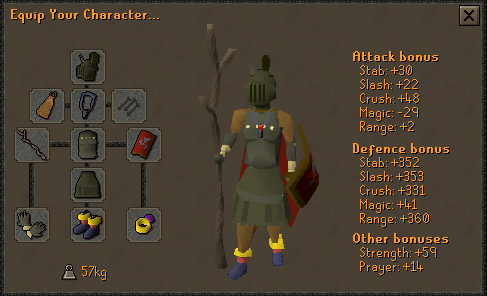 Slayer staff for 'slayer dart'spell. You may wish to use a crystal shield. Again, if everyone in your team has guthans, or you're on a 2 person team that is just killing rex, then take guthans. 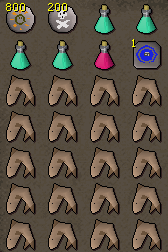 Runes for magic dart spell. 200 is generally enough but it would be recommended to take 300+ just in case, because once the mage has to leave (take 500 casts if using guthans) - everyone has to leave. If on Guthans, take extra potions and extra runes as you'll be lasting much longer. 10 prayer potions should be enough and 3 super anti-poison. 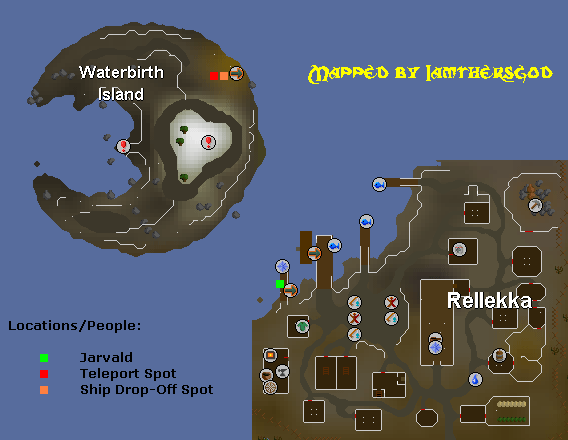 Use the following key to assist you with the next part of guide: 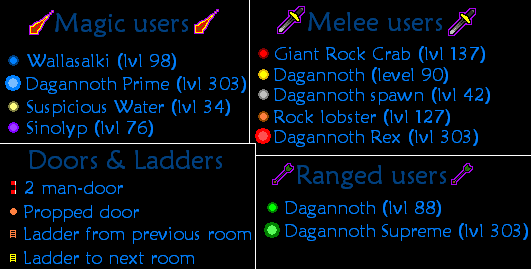 Note: If Wallasalki's are around, use protect from magic. These are the most damaging monster not in the King's Lair. 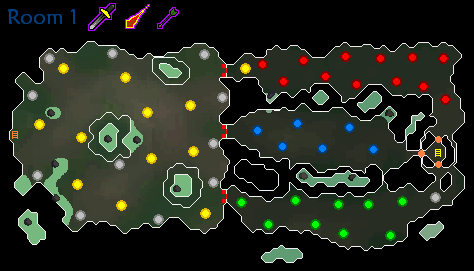 This is the room that requires 2 people or more to proceed any further in the dungeon. At least 2 of the 2-man doors must be opened, after the buttons have been stood on and the door opened it will stay open for a few minutes - enough time to run over to the other one and open that up (if you're on a 2-man team). Then, have at least 1 person go through each of the entrances - when you meet up at the propped doors, you must attack the opposite door with a range or magic attack. When one door is down, the people that were behind that door can now run through and attack your door to open it for you.

The ladder here will have 2 options, make sure you choose the right one and go down.

2 small rooms easy to get through.

Keep running through here using the correct prayer. When you reach room 9, walk up to the east wall until you are against it and then stop. Note that your energy may of run out before you reach this room, no need to panic. You should wait in room 9 until your energy is at at least 50%, then proceed. (standing against the east wall will be a safe spot, so you won't get attacked). 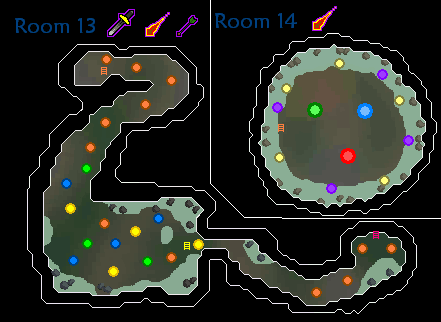 When you enter room 13 you should stop and get behind the ladder so that nothing is attacking you. Wait here until your energy is at least at 30% and then if you're using lunar, pot up now. Get prepared to enter the King's lair...if you're injured, heal - if your prayer is low, restore it.

As you reach the final ladder leading to the King's lair make sure your protect from magic is on!

These, surprisingly, will do you the most damage when at the King's (unless you do something incorrect, like use protect from range when Prime is around). It's advised you leave them alone, as they respawn quickly so there's really not much point in killing them unless you're using guthans on them to heal. These also poison you for 6, hence why you should bring a super antipoison potion with you.

If Prime is around, have magic prayer on!

Can cause trouble if he isn't dealt with correctly by the mage, otherwise he's harmless. He doesn't stick to 1 spot and wanders the whole thing, that's why it's important for the magician to attack him as quickly as possible so that he doesn't wander into the range/melee hybrids and hassle them.

Not too much trouble caused by him, if you've placed yourself correctly he'll just wander about by himself not attacking anybody. 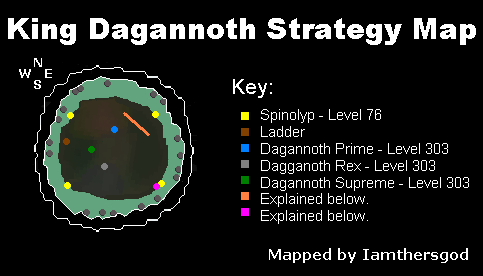 The pink dot is where the magician should stand when maging Rex. If he/she positions themselves correctly, right alongside the coast, he/she should be safe from Rex's attacks and all other Dagannoth Kings should leave him/her alone.

The orange line is where the range/melee hybrids should be for most of the time. From here they range Prime, standing here means Supreme will leave them alone and assuming the magician is attacking Rex, Rex should aswell.

Having no one on lunar means each person is taking 3 sharks less than they would with someone on lunar so only do it if you have no other option. Arrive at the King's, go down with magic prayer on - the magician should position themselves at that pink dot and immediately attack Rex. The range/melee hybrids should kill Supreme straight away, initially you're always going to be punished as you MUST use magic prayer and still have Supreme attacking you. It's crucial to kill Supreme as quickly as possible and then retreat to the orange wave and range Prime.

Once Prime is dead, the range/melee hybrids should run over to where Supreme is, turn on protect from missiles and kill him with melee then retreat back to the orange wave and turn on protect from magic. All going well you should make it back to the orange wave with time to spare before Prime respawns, use this as an opportunity to heal and drink potions.

Option 2: A team of 3+ with 1 magician and 2 range/melee hybrids, one of which on Lunar:

At the beginning of room 13 is a safe spot behind the ladder. All the other range/melee hybrids should meet here before they go down and the person on lunar should use boost potion share on the super pots and the range potion. Note: It uses 1 dose for each person. It's optional but once the potions have been shared each other member of the team should trade the person on lunar a shark to make up for their deficiency due to runes and potions. After this, mimic the strategy from Option 1, when the effects of the potions have worn out, the team should regroup on the orange wave and more boost potion share spells should be cast.

Range/Melee Hybrid:
Kill Prime with range and Supreme with melee. AVOID Rex on all occasions. Alert the group when they need to teleport.

Magician:
It is EXTREMELY important that the magician attacks Rex as soon as possible! Once Rex gets in attacking distance of someone, or someone attacks him - he clings and follows them about and won't leave them alone causing big damage! The magician should have auto-cast set and also when waiting for Rex to spawn should manually click on the spell so they can 1-click attack Rex. Alert the group when they need to teleport.

Sometimes Supreme will position himself in the same spot where Rex spawns, in this instance all the range/melee hybrids should back off and wait or stand on the opposite side of Supreme to where Rex spawns. If Rex has recently died and is not far from spawning, the magician should warn the rest of the group so they can avoid standing where he spawns.

If Rex does start attacking the range/melee hybrids they should kill Supreme as quickly as possible and immediately retreat to the safe spot (pink dot on the map) and then try to leave without Rex noticing and having him stick to trying to attack the mage. If all else fails, just kill him using magic prayer (Prime will probably start attacking you). When Rex is down, return to the orange wave and get back into your routine.

Sometimes you will get a puzzle box random event. VERY annoying! In this case, let the others know and then go up the ladder and head slightly east to where there is no monsters. Answer the box and go back down. Alternatively, if you're near the end of your trip you can wait and let it stack up - but then you'll have to spend some time answering them when you're done.