The King Black Dragon (or KBD for short) was once the strongest monster in all of RuneScape. It was by far the most difficult and challenging monster in RuneScape before the addition of the Kalphite Queen and TzTok-Jad. Players found him challenging because of the fight and finding the dragon itself. The King Black Dragon is no longer popular and very few people/clans make the journey to fight this being. The mighty Dragon is a powerful level 120. 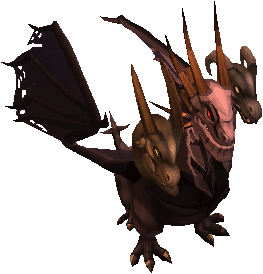 You need to be a RuneScape Member, and it is suggested to have combat stats of at least Level 70 for a group battle, and at least Level 80 to go solo.

Here are two VERY important key items you will need to try and slay the dragon with:

Note: The effects of both of these potions will expire after 6 minutes. This will be announced in the chatbox.

To kill the KBD you will need the right equipment, otherwise fighting him will end in death after just a few hits, if that many.
NOTE: Equipment with the * indicates that it should only be used along with Super antifire potions.

How to get to the lair:

The Edgeville Artefact will teleport you directly into the lair, but if you wish to access it through the Wilderness, you will need to take several steps to enter. You must first walk go to the Lesser Demon cage west of the Lava maze (see map above). Once there, go down the ladder and you will be in a room filled with spiders. The spiders here can poison you, so be careful if you have decided not to bring an anti-poison pot. If you have, this part is no big deal. Quickly run to the nearby lever and pull it. You will now be teleported to the lair (the lair is not located in the wilderness). 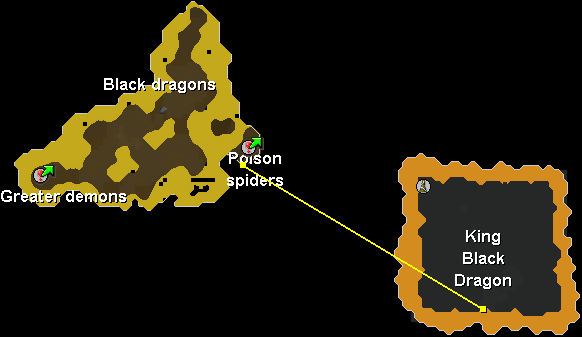 Here are some statistics about the KBD, before you hunt him down: Maximum damage with melee: 820, the maximum damage the dragon can do with dragon fire is 4,205 if you don't wear any anti-dragon fire shield. The KBD also has a number of special attacks:

Each of these attacks and the dragon's normal dragonfire have the ability to damage you multiple times from one hit, varying from 1-100 lifepoints or more if you are not using sufficient dragonfire protection.

Upon arrival to the lair, it is wise to drink potions immediately. Drink a dose of each of your potions (If you brought any), and run to the other side of the lair. This is it; the KBD will now start attacking you! The dragon can mage and melee attack you. If you are going in a small group of 3's, you should make a triangle around the KBD, this way, the KBD will have to turn to attack you, and this makes him slower. You can use any of the below Techniques, it's really up to you. 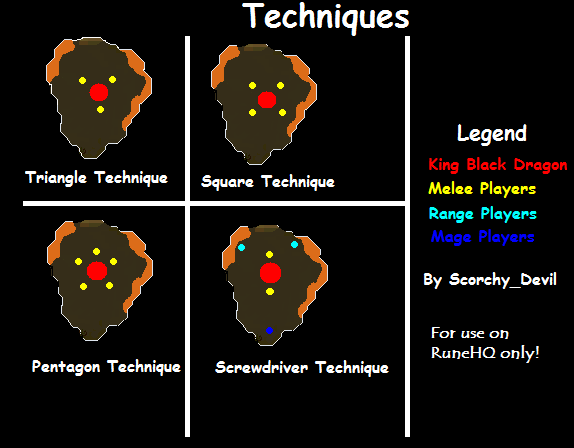 If you managed to kill the KBD, Congratulations! Click here to see what the KBD drops. The KBD 100% drops Dragon Bones and Black Dragonhide. If you wielded a Ring of Wealth, you have a greater chance of getting something rare from the King Black Dragon.