The Kalphite Queen, one of the earliest bosses to be released in RuneScape, is mainly sought after due to her chance of dropping a Dragon Chainbody. The Kalphite Queen has a combat level of 333, therefore it is advised that players should have relatively high combat levels before attempting to kill her.

Killing the Kalphite Queen is a dangerous activity, therefore players should only bring what they are willing to lose, as death will result in loss of items.

Please Note: You will need two Ropes for your first trip. Afterwards, the ropes are permanently fixed at the entrance.

Your equipment and inventory requirements will depend on which method you choose to battle the Kalphite Queen. The following describes what you will need when fighting with melee weapons, fighting with ranged weapons, crossing the desert, and entering via the Dorgesh-Kaan south dungeon.

Please Note: In both cases, it is important to have an antipoison potion. Kalphite Soldiers, Kalphite Guardians and the Kalphite Queen will poison players at any time.

For players who prefer close up combat, the main set of armor to wear would be Verac's. This is because the Kalphite Queen will be using protection prayers, and the Verac's set ability allows players a greater chance to hit through this protection. 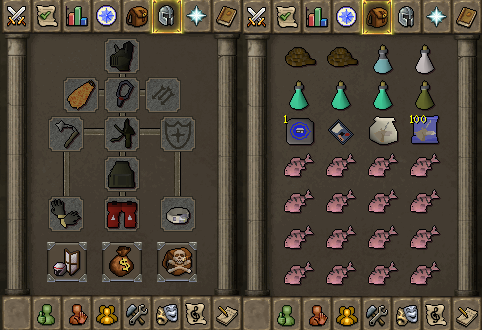 For players who wish to go all out on the Kalphite Queen, higher level armor and weaponry, which give higher accuracy bonuses, may also be used against her: 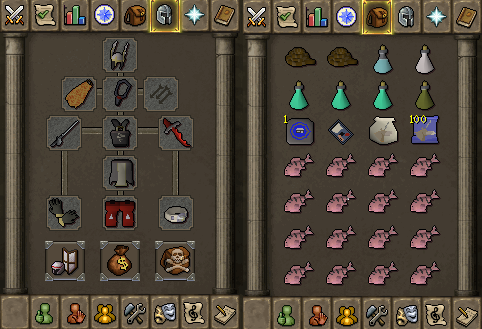 There are many substitutes that players can bring if they feel they don't want to risk these items, or maybe they are a bit out of their price range. These may include:

The rest is filled with food. Sharks would be the recommended food to take, however Cavefish and Rocktail may be more suitable for higher players. Players using Overload Potions may want to use Saradomin Brew(4) instead.

Some players may prefer to range, which will be beneficial to a team when it comes to the Kalphite Queen's second phase, as she will be more exposed to ranged attacks. The following is an ideal set up for ranged: 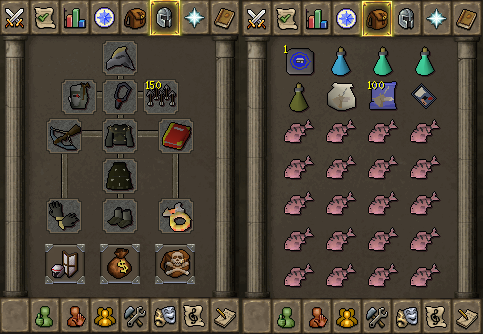 However, again if players feel that they do not wish to risk as much, then the following substitutes may be used:

The rest is filled with food. Again, Sharks would be the recommended food to take, however Cavefish and Rocktail may be more suitable for higher players. Players using Overload Potions may want to use Saradomin Brew(4) instead.

Finally, if you are using the Dorgesh-Kaan south dungeon to gain access to the Kalphite Lair, you will need to modify your inventory to the following: 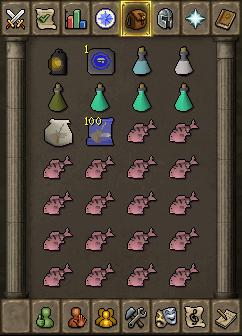 The following substitutes may be used:

Again, the rest is the food you will be taking. If you are bringing a Candle instead of a Bullseye lantern, then please bring a Tinderbox with you incase the light source goes out!

Getting to the Kalphite Queen:

Method 1 - Shanty Bank:
The nearest bank to the Kalphite Queen is the Shantay Pass (unless you have completed A Fairy Tale Part II - Cure a Queen). You will need to buy a Shantay Pass from Shantay for 5pg. 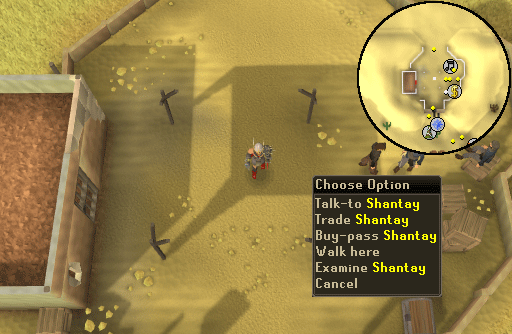 Once you have made sure that your inventory is correct, then proceed to the Kalphite Queen's Lair.

Method 2 - Fairy Ring Network
If, however, you have completed the quest A Fairy Tale Part II - Cure a Queen, then use the fairy ring code "BIQ" and then run north west. 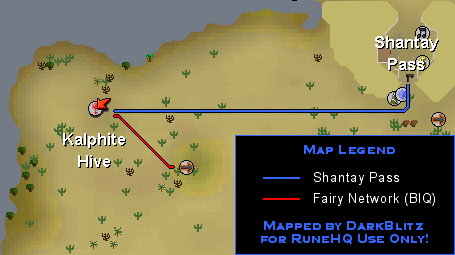 If you chose method 1 or 2, then you will need to place a Rope on to the tunnel entrance of the Kalphite Lair in the desert here: 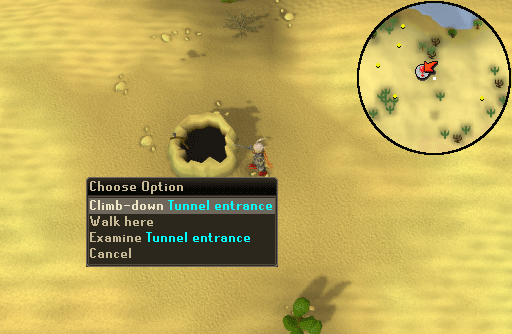 Method 3 - Dorgesh-Kaan Caves
If you have completed the Death to the Dorgeshuun quest, the third and final method is the via the Dorgesh-Kaan south dungeon. To do this, enter the Dorgesh-Kaan Agility Course and step down the ladder closest to you. Then run south until you see a blocked tunnel. This will be the entrance to the Kalphite Lair. 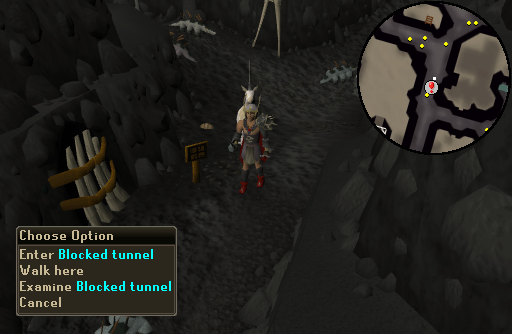 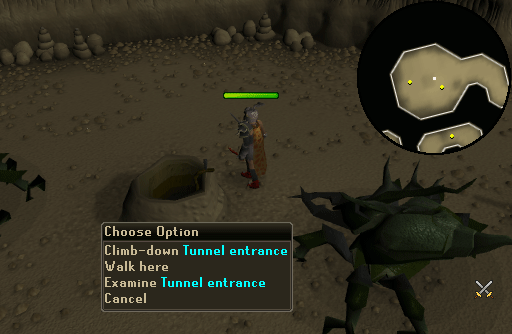 A final safe area to stand in before attacking the Kalphite Queen is just after the second Rope. Here you can make sure that everything is ready, make sure that your quick prayers are selected. You must be using Protect/Deflect from Magic or you will receive a huge amount of damage from the Kalphite Queen's magic attack which will bounce off every player. 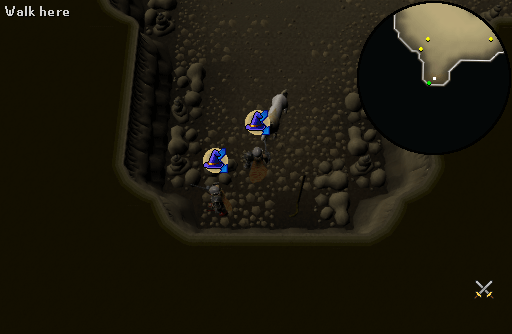 When you are ready, run north and proceed to attack the Kalphite Queen. The first form will be using a combination of Protect from Magic and Protect from Ranged, so players using melee equipment will be most effective at this stage. 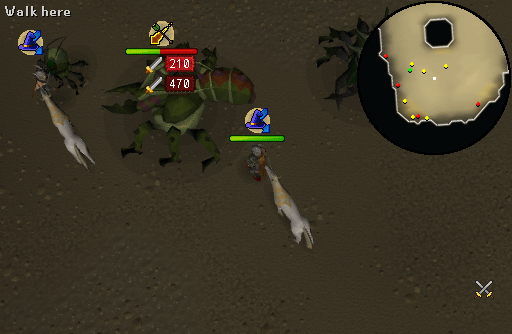 When her first form has died, her second form will appear, and it will be using Protect from Melee. This is when the Verac's equipment will come in useful, or players who are using ranged may wish to inflict as much damage as possible here. Continue to use Protect/Deflect from Magic or she will hit everyone with a magic attack that will bounce off everyone. 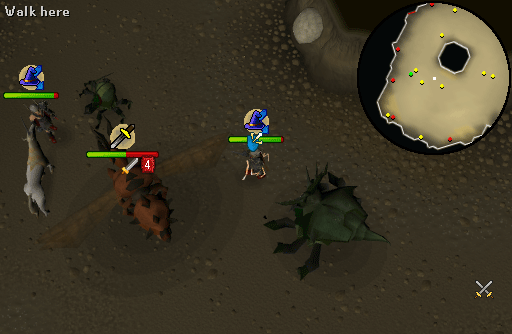 After the Kalphite Queen is dead, finish off any smaller Kalphite workers and wait for the next spawn. A Good money making tactic here is to bring a Pack Yak, and some Winter Storage Scrolls, and bank any Potato Cactus spawns in the area as the Kalphite Queen will take some time to respawn.

It is advised to take a one-click teleport method if you safely want to leave the lair or if you are close to dying. Below you will find a list of teleport methods if you plan on doing multiple trips.

Simply use Law runes and the other runes of your choice to teleport to wherever you wish. Then teleport back to Al Kharid with an Amulet of glory or Ring of duelling.

A very good method would be the use of teleportation tablets. If you have or know someone who has a Teak or Mahogany Eagle Lectern in their study, you can go to their house and make either the teleportation tablet of your choice. Then teleport back to Al Kharid with an Amulet of glory or Ring of duelling.

If you have completed the Ghosts Ahoy quest, then the Ectophial is a nice option to teleport out. However, you may still get hit one time once you reach the Ectofuntus. Then teleport back to Al Kharid with an Amulet of glory or Ring of duelling.

If you have completed the Mourning's Ends Part I quest, then you can use this method. The Teleport crystal teleports you to Lletya, right near a bank and an altar. The only downfall of this method is that you can only use it 3 times before you have to recharge it. This is not bad if you have a high amount of them, but it is not the best option either. Then teleport back to Al Kharid with an Amulet of glory or Ring of duelling.

Soloing the Kalphite Queen can be a massive task. In order to have a successful solo trip, you should have a combat level of around 120. Do everything like you would do if there were other people around but you have to be vigilante of your hits. Having the Kalphite Queen only attack you will make the hits add up real quick. Do as much damage as you can in one round and teleport out as soon as you run out of food. Make your way back to the lair as fast as possible. You need to do this quick as another team of people can easily come in and steal your kill. Hopefully in 2-3 rounds you should be able to kill the Kalphite Queen. Going in solo really uses up a lot of food, but if your lucky enough to get a good drop, it will be all yours. It is a high-risk, high-reward method of killing her.

The Kq head is a rare drop from the Kalphite Queen. It is a non-tradeable item that needs to be stuffed at the Taxidermist in Canifis for 50,000 Coins. Then it can be stored in your bank or put on your wall in the Skills Hall room of your house if you have 78 Construction.