1029
Invention Machines
Introduction:
There is a new area at the rear of the Invention Guild, directly behind the bank chest, which has recently opened up! Previously, the tunnel entries on both sides were boarded up, but now they lead to Machines

At level 60 Invention, one can begin manufacturing Invention Guild Machines to use to their benefit. Doc, in the Invention Guild, offers a tutorial on the new machines. This tutorial can be skipped if you wish, but it is wise to follow it through. 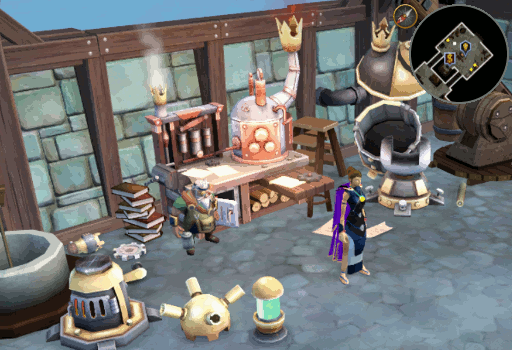 This new area has two levels with six machine building hotspots available as well as one for the Power Generator. They are similar to the ones in a Player-Owned House, except they are not "shadowed" in build mode. They simply open up a menu when the hotspot is clicked. 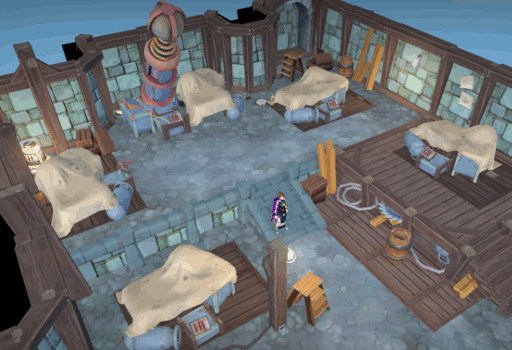 All the build spots offer the same options, so there are no advantages to building certain types of machines in specific spots. You are free to build machines in any spot or combinations of spots you wish, excluding the Generator spot which can't be relocated.

For convenience the four machines on the lower level are clustered closest to the bank, so these are a popular location choices.

The Generator is the first machine that needs to be built and can't be relocated. All upgraded versions of Generators occupy the same spot. 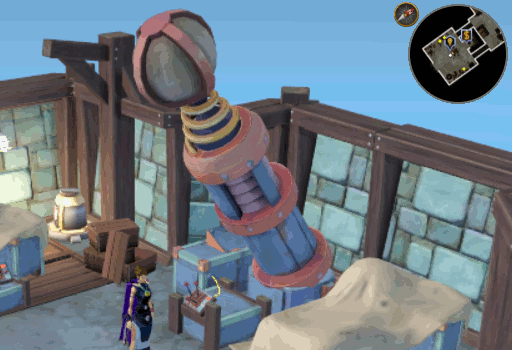 If you are short on parts to build the Generator, or any other machine, you can simply disassemble items until enough are obtained.

The first Generator to be built is a Simple Generator. It is followed by the Large and then Jumbo Generators. Each level of Generator offers increasing amounts of power, but requires a larger cost to build and maintain.

Each level of Generator provides a varying amount of power supply, from 100 to 160 power. With each level increased, you will be able to maintain more machines at any given time.

It is recommended to upgrade the Generator as soon as possible to achieve maximum benefit from the machines and to have more choices on what to build.

Built machines function from this power, and can't have a power need greater than the capacity of the current Generator. As long as the power needs from built machines is equal to or lesser than the Generator's output capacity, they will function.

To charge a built Generator, you must have Divine charges in your inventory. These are the same charges used to power Augmented weapons and Tools. You can also withdraw added charges.

After adding or subtracting charges, you will be told how many converted charges your Generator now has. This will appear as green text in a box, seen below. 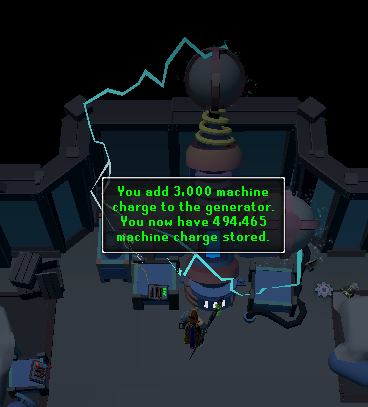 When you click on a built Generator, you will have some options. Select "Add charges" and a box will appear asking how many you wish to add. Type this number in and the number will be added. You cannot add more charges than the number in your inventory, so please remember to have a sufficient amount. The maximum number of converted charges allowable is 500,000. Adding 1 Divine charge produces 3,000 "charges" to the Generator so you will be unable to add more than about 166 Divine charges.

Currently there are five types of machines available to build. They are: a Plank maker, an unfinished Potion maker, an Alchemiser, a hide tanner, and an Automatic item disassembler. You must have first discovered the Blueprint in order to build the corresponding machine.

Constructed machines can function when you are off adventuring, questing, are AFK, or even when you are logged off! As long as they are stocked and charged, they will function.

Machines produce up to a certain amount every hour. The icon that appears in the manage machine menu differs depending on which machine you are looking at.

Restocking cannot occur until the product produced is collected. To collect, simply click on the icon or the "Withdraw Output" button below. A summary of produced components will appear in your chat box lines. 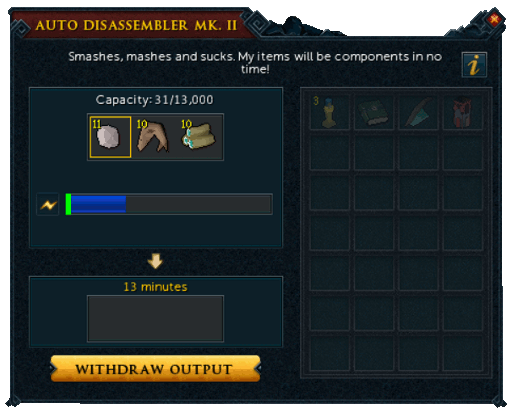 Within the machines, you can place up to 3 different types of hides/herbs/logs/items into it. However, the total number of items still cannot exceed the machine's capacity. So for example: On the Auto disassembler mk. II you can disassemble logs, potions, and bows at the same time

As can be seen in the image above, the left side will show: the items that are currently in the machine(both of individual items and of the total capacity), the amount of charge in your generator, how long it will take to work through all of the items, and any items produced. The right is your inventory with items that cannot be added to your current machine faded out.

As seen above you can build different combinations of machines, provided that you have the level to do so and you stay within the Generator's power limit. If wanting to build a machine(s) that will take you past your Generator's capacity you will not be able to build it. Choose wisely!

This machine converts your deposited items into gold. For the initial model of the Alchemiser, as well as depositing items for alching, you must also deposit the same value of runes per item as you would use in the High Alchemy spell. This is currently 5 Fire runes and 1 Nature rune. So for alching 100 items, you would also need to deposit 500 Fire runes and 100 Nature rune. Combination runes cannot be used.

Building the Alchemiser requires level 72 Invention as well as:

This has a capacity of 1,500 items and gives you an output of 8 alchs per hour.

The Alchemiser mk. II runs similarly to the regular Alchimiser, except it only requires the Nature rune for each item alchimised. Building this version of the Alchemiser requires level 108 Invention as well as:

This has a capacity of 5,000 items and gives you an output of 25 alchs per hour.

These machines have low running costs, but a slow and low output. They should be considered low on the list to build or used as a set and forget option.

If you have adequate ongoing supplies of, say Slayer drops, then this could be a consideration. One must consider rune costs and running costs versus the items alchemised.

These machines are without doubt the most important and highest priority machine to build. They do the leg work for you in disassembling components, which gives you a source of consumables and, consequently, income.

Building this version of the Auto disassembler requires only level 60 Invention as well as:

This has a capacity of 7,500 items and gives you an output of 35 items per hour.

Both versions of these machines have the distinct advantage of low operating costs and, in the case of the upgraded version, an excellent output amount per hour. It is highly suggested to construct at least 2 of these machines to greatly reduce the time spent gathering components. The more machines, the quicker the returns. If, for example, you require Simple parts, you could construct 4 Disassemblers and set them all for Simple parts. And in turn you would reach your components cap of 100,000 very quickly!

This machine tans hides for you into the corresponding leather. It can save you many trips back and forth to a Tannery or time and runes using a Make Leather spell.

Tanned leathers are created at no coin costs, but these machines use a large amount of power.

Due to the high running costs and average returns, it would be advisable to build this machine only when very large numbers of leathers are required. For example, converting 10,000 hides would take around 9 days with 1 machine built. Then there is the requirement of needing to have that large number of hides to begin with!

If one is built, is a good tactic to check the machine often if the leathers are to be sold for profit. If they are for stock then you can set and forget the process.

As the name suggests this machine converts herbs and Vials of water into Unfinished Potions. You will need 1 Vial of water for each herb put within the machine.

This has a capacity of 3,750 herbs/Vials of water and gives you an output of 13 potions per hour.

This has a capacity of 13,500 herbs/Vials of water and gives you an output of 40 potions per hour.

This is one of the more profitable machines to make because it saves a lot of time making unfinished potions. With just about all herb varieties, it is also very profitable for selling the potions; Double Experience Weekend, for example, causes these items to always be in high demand and usually fetch a premium price.

As the output is not vast per hour, you can build this machine and let it work in the background to your main machines. A good budget option is to build the base machine, then stock and forget it. Check it once weekly or as often/seldom as you like.

Another good advantage of this machine is that it brings back value to the lower ended herbs converted into unfinished potions. For example, you can use it to make Energy potions or Antipoisons and then disassemble them for other components.

The only small drawback is that you must also add Vials of water equal to the number of herbs you supply.

This machine turns logs into planks. The higher the level of log you supply the higher the level of plank produced. The cost to run the machine filled with say willow logs as opposed to Mahogany logs is the same. The highest level log you can sacrifice should be used. There are no extra coin costs to produce planks as with the Saw Mill.

Building the Plank maker requires level 99 Invention as well as:

This has a capacity of 5,500 logs and gives you an output of 13 planks per hour.

This has a capacity of 7,500 logs and gives you an output of 40 planks per hour.

This machine is an excellent companion to the Woodcutting Skill. Logs below Teak or Mahogany are not recommended to be used. Lower tiered planks made are of a lower value and have a low demand. You may also incur a net loss making them.

Below you will find several tips, tricks, and facts about working with machines: