1048
Anachronia Base Camp
Introduction:
Anachronia is without civilization, and in order to make use of the island and uncover its history, Mr. Morduat will need a base of operations. However, before you can go crazy building up your camp, you will need to complete the tutorial.


If you have yet to visit the island of Anachronia, you will need to start by taking the Stormbringer to the island and going through the cutscene/tutorial-esque sequence. Once you have done this, you will arrive at the ruins of what might have been an ancient town, and will decide to make a base of operations.

Talk to Giles to begin the base camp tutorial. He will decide that it will be the location of the base camp, as it is "strong, defendable, and gives us some high ground". He will ask you to help him out. They will need several buildings to have everything necessary for survival and discovery, and (apparently) Giles is the man with the plan.

Accept his request to establish the base camp and he will begin going over what buildings will be needed. 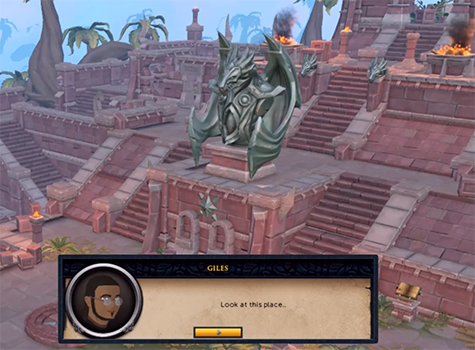 The base will need a Town Hall, which will be placed in the temple atop the ruins. From there, the base camp needs to expanded outward, using only the materials the island can provide. The resources of the region are Wood, Vines, Leaves, Stone, Hides, and Clay. These resources are gathered by a number of workers that King Roald provided to the exploration party, who will begin their standard gathering cycle after the tutorial.

For now, your next objective is to assign at least one worker to gather Wood, Vines, and Stone, the building materials needed to make the Town Hall. Once Giles has given you this objective, the Base Camp Management interface will open. However, like banks, metal banks, and trading, it is guarded by your PIN if you have one. 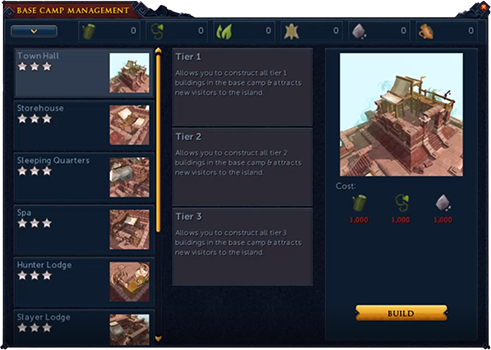 At this point, the flashing icons are going to light your way the way all cringy tutorials do. While this guide itself will walk you through the ins and outs of the interface, a set of diagrams for quick reference will be placed at the bottom of the guide.

The downward arrow in the upper left of the interface is your first stop. By clicking it, you expand the worker management section. Using this section of the interface allows you to assign your workers to gather the 6 resources of the island in whatever amounts you please. Until you upgrade the Sleeping Quarters, you will only have a total of 10 workers. The number of workers who are active is noted on the left side of the worker management section. If the number is 10/10, all ten workers you have are actively gathering resources. If you have 8/15 listed, then you have a total of 15 workers, but only 8 of them are gathering resources, and the other 7 are idle (hopefully enjoying some paid time off, but who knows).

Assign workers to resources by clicking the + symbol below the resources you want them to gather. The tutorial will have you assign at least one worker to wood, vines, and stone before moving on. Until there are enough resources, you are unable to build anything. In the span of an hour they will collect 60 units of their respective resource, but every 10 minutes the workers will deliver resources back to the base camp, during which time they will have collected 6 units. Note that workers continue to gather resources even when you are logged out or not on the island!

At this point, you can close the interface. Doing so will continue your conversation with Giles, who will tell you that you have to wait for enough resources, but he can tell you a story to pass the time. The game will fade to black and then fade back in, sparing you what is likely a boring story.

Continuing the dialogue, you will ask if the workers have returned, and Giles will say that they have brought everything you need to build the town hall. At the end of the dialogue, your Base Management Interface will open again.

Most buildings for the base camp have three tiers. The building is selected in the left column and the stars colored yellow indicate what tier of that building you have built. The specifics of the benefits for each tier are laid out in the middle column. Lastly, an image, list of requirements, and build button are in the right column.

With the town hall selected in the left column, hit the build button on the bottom right of the interface. Those who get dizzy easily should look away at this time for 15 seconds, as the game will zoom out into a cutscene where the camera circles around the fully constructed town hall.

After this cutscene ends, dialogue with Giles will open up again, and following it will eventually lead to you opening some compacted resources, adding 250 wood and 250 stone to the base camp's resources. Finally, Giles will tell you to go to your calling and adventure around the island, letting you know that he will be in the town hall should you need him. 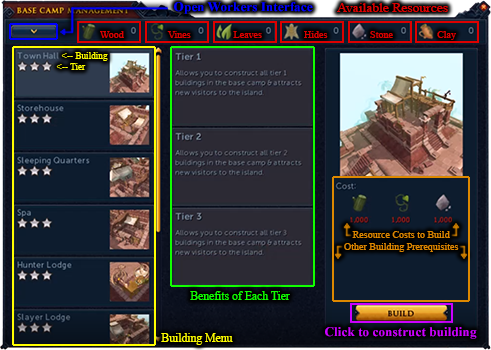 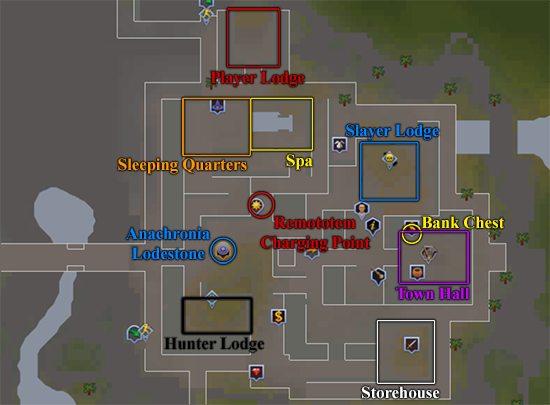 Now that the tutorial is out of the way, the benefits of the buildings in the base camp are yours to acquire. The fastest way to obtain every building involves you focusing on constructing tiers of sleeping quarters, storehouses, and town halls.

Having the sleeping quarters upgraded is the whole point of this building order, as it provides you with more workers, and as a result, faster resources. However, it requires both the storehouse and town hall of the same tier, and even if it didn't, the storehouse would be necessary in order to build most tier 2 and tier 3 buildings because your resource cap would otherwise prevent you from having enough to build them.

If you manage your workers infrequently, you should assign them to Wood, Vines, Leaves, Hides, and Stone. Clay is not used in the construction of these three buildings, and as such can be ignored. If you manage your workers often, always have them assigned to the resources needed for the building next on your list. With some minor options depending on your involvement with island, the fastest building method for the base camp is detailed below.

*The Tier 1 Town Hall and the resources to build it are provided to players during the tutorial
**If you have any intention of spending time on Anachronia other than to keep track of your base camp's resources, building the lodestone and bank chest before the storehouse is a good idea

After these buildings are completed, there's only 1 building worth considering to speed up the development process- the Tier 1 Player Lodge. The odds of finding compacted resources on the island are fairly slim, and this building will increase the chances of finding them.

However, the odds are still pretty small even with this building, so choosing to build it before you finish the Tier 3 Sleeping Quarters is counter-productive. If you are spending lots of time on the island and are hoping to speed up your base camp's construction, choosing to build the Player Lodge next is a good course of action.

Outside this decision, the buildings remaining to be built and upgraded have no impact on the speed at which the base camp is constructed.

There are also 2 structures that players can build that are built outside the base camp (and a number of dinosaur pens at the Ranch Out of Time, see that guide for details). While the structures can be built in multiple locations, building them once will build them in every location. The structures are detailed below. The first is a bait box that can be used to store all of your bait for Big Game Hunter. While the locations for Big Game Hunter are outside the base camp, there is a box to the south of the lower town hall stairs.

*While the tier 3 bait box doesn't require more than the tier 1 town hall, a player cannot build it without a tier 3 storehouse in order to have enough resources to build it.


*While the bank deposit boxes don't require more than the tier 1 town hall, a player cannot build it without a tier 2 storehouse in order to have enough resources to build it.