1121
Fate of the Gods
Description:
The gods are returning to Gielinor but something is preventing the arrival of Zaros. Help Azzanadra to bring his god to Gielinor and find out more about Zaros and the elder gods along the way.
Difficulty:
Grandmaster
Length:
Long
Quest Requirements:
Missing, Presumed Death
Skill/Other Requirements:
79 Magic
76 Slayer
75 Divination
73 Agility
67 Summoning

Quests Unlocked/Partially Unlocked by completing this Quest:
Children of Mah
Heart of Stone
Light Within, The
Items Needed at Quest Start:
Armor, a Weapon, and lots of food.
Items Needed to Complete Quest:
None.
Items Recommended for Quest:
A Ring of visibility, a fully charged Engrammeter (must be charged for a 16th time after completing Mahjarrat Memories), a Face mask or item containing one e.g. Slayer helmet, a War tortoise or Pack yak pouch summoned and filled with food, and 1-2 Super restore potions.
Items Acquired During Quest:
Memoriam crystals (optional), The Measure, Mah memory, Mah energy, Divine simulacrum (dark) or Divine simulacrum (light), and the Shard of Zaros.
Quest Points:
2
Reward:
125K Magic XP, 100K Divination XP, 100K Slayer XP, 75K Agility XP, 50K Summoning XP, the Shard of Zaros, the ability to fight Bladed, Force and Throwing muspahs on The Cradle in Freneskae, and 2 free Treasure Hunter keys.
Start Point:
The World Gate found southwest of the Tree Gnome Stronghold and northwest of the Arandar Gate.
To Start:
Talk to Azzanadra.
Instructions:

Before starting, it is highly recommended to activate and use both Ancient Curses and Ancient Magicks throughout this quest.

There are a number of additional rewards you can unlock by talking to certain NPCs after completing Zaros and Mahjarrat related quests:

There are four Elder Chronicles to be found which award 50K Divination XP each when The Measure is placed in certain locations:

Upon completion of the quest, you can return to Freneskae to collect the remaining 12 Zaros memoriam crystals and 4 Seren memorian crystals. You can use the World Gate to quickly access any of the locations within Freneskae:

Seren's crystals are all found in The Approach on a small plateau with four pillars. One of these pillars will be active at a time and can be tagged. You must tag the active pillar 80 times to obtain all four crystals. Note that as you tag more pillars, the frequency of lightning strikes will increase and you will need plenty of food to survive long enough to tag all 80. 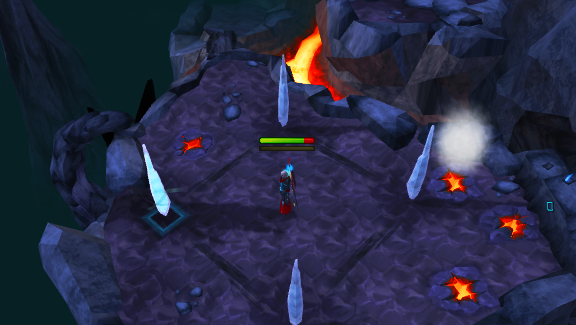 Once you have all 12 or 16 crystals, take them to The Sanctum and activate the Memoriam device to obtain all memories and unlock two cosmetic overrides called the Helm of Zaros and Crest of Seren.

Finally, you can unlock the "the Annihilator" title by engaging all four Nihil in combat at once and then kill them. It is recommended to get the Blood nihil down to low health before attacking the other three, and then quickly finish it off to prevent it from healing the others.