1166
Crocodile Tears
Description:
Something seems to be off with the crocodiles on the River Elid. Senliten and Leela need your help to figure out why they are being so aggressive and find a way to put a stop to it.
Difficulty:
Master
Length:
Medium
Quest Requirements:
Jack of Spades, The
Missing My Mummy
Spirits of the Elid
Dealing with Scabaras
Skill/Other Requirements:
Rank 3 Menaphos city reputation, 73 Hunter, 72 Fishing, 47 Woodcutting, and 30 Agility
Quests Unlocked/Partially Unlocked by completing this Quest:
Our Man in the North
Items Needed to Complete Quest:
Combat equipment, food, Rope, Fishing rod (in your inventory or on your tool belt) and Fishing bait (unless you have the baitless fishing perk), Woodcutting tools, 16,000-28,000 coins, and cat/kitten
Items Recommended for Quest:
Pharaoh's sceptre/Sceptre of the gods, Desert amulet (2, 3, or 4) or TokKul-Zo, (Super) Dominion medallion, Waterskin or Enchanted water tiara, Super energy potion/Explorer's Ring 4/a trip to the Oo'glog spa
Items Acquired During Quest:
Dowsing rod, 16+ Croc ices, 1 Raw beltfish, 2 Acadia logs, 4 Pyramid tops, and 8 Plover bird
Quest Points:
1
Reward:
35,000 Fishing experience, 35,000 Hunter experience, 15,000 Agility experience, 15,000 Woodcutting experience, Immunity from desert heat, A Relic of Crondis (gives 5,500 reputation with the Menaphos faction of your choice), 1.5x the base Menaphos Reputation gain, and 2 Treasure Hunter keys plus 2 Hearts of Ice.
Start Point:
Senliten's tomb.
To Start:
Talk to Senliten.
Instructions:

After you have completed the quest, if you have at least 80 Constitution, you can enter Crondis' tomb. The tomb can be found to the right of the entrance within her pyramid. You will need to swim through an underwater tunnel in order to access it. 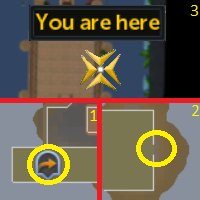 You will gain 20,000 Constitution experience the first time you enter this area. Inside of the tomb you will also find the Crondis mask and Nekhakha. Note that it is a Master Quest cape requirement to locate this tomb. 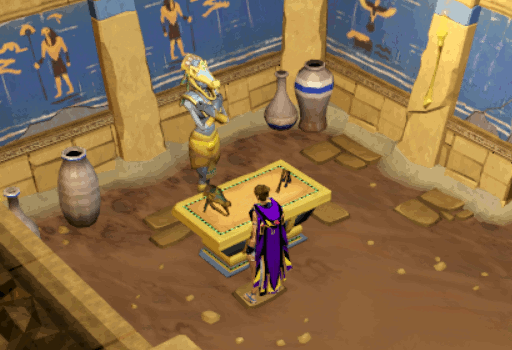