1242
City of Senntisten
Description:
It's the quest you've all been waiting for! The one that'll see you finally uncovering the mysteries of the Varrock dig site and descending into the shadowy depths of Senntisten, the lost capital of the Zarosian empire.

But be wary, adventurer - City of Senntisten represents your last chance to bolster your defences and weaken the Elder Gods before they launch a full assault on Gielinor, and danger lurks in every shadow. Will you be able to unite the gods of Gielinor and transform the city into the fortress it needs to be?
Difficulty:
Master
Length:
Long
Quest Requirements:
Azzanadra's Quest
Battle of the Monolith
Quests Recommended:
Desert Treasure
The Temple at Senntisten
Skill/Other Requirements:
Quests Unlocked/Partially Unlocked by completing this Quest:
Eye of Het I
Items Needed to Complete Quest:
*Toolbelt works
Items Recommended for Quest:
Items Acquired During Quest:
Quest Points:
3
Reward:
Start Point:
The Heart of Gielinor
To Start:
Speaking to Ariane.
Instructions: 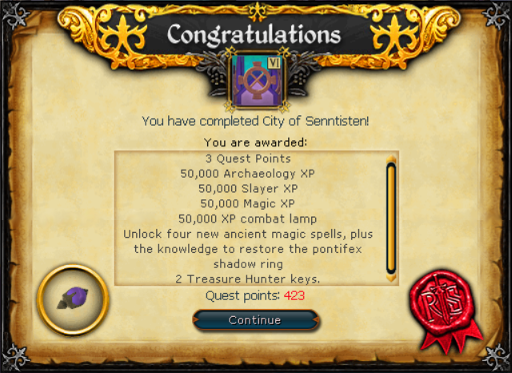 Upon completing the quest you will gain the ability to make a Pontifex shadow ring. To do so, take the Pontifex observation ring (reclaimed from Ariane in Kharid-et if previously lost/destroyed) and a Dragonstone to an Archaeology workbench. The restoration yields 2,193.3 Archaeology experience. The resulting ring can teleport you to the cathedral and can then be upgraded using anima dropped/harvested from within the Senntisten Elder God Wars dungeon.

Using 1,000 of each anima on the ring will provide additional benefits while worn:

With all 4 animas used on it, you can now gain up to 8 Tier 3 Elder troves per hour; these have a chance to contain Pernix Quiver fragments. After this, you can bring the ring to Wahisietel, in the cathedral, with 5,000 of each anima to make all the abilities of the ring passive effects that apply regardless of whether or not you wear it.