1159
Children of Mah
Description:
Kharshai's in a sticky situation as the quest begins, but that's only the tip of the iceberg. The Mahjarrat are dying... and there's no way they're going quietly.

Join the great and the mighty on an epic jaunt across worlds, relive one of the defining moments of Gielinor's history, and prepare to find out what will happen when Zaros and Zamorak finally meet again.
Difficulty:
Grandmaster
Length:
Medium
Quest Requirements:
Dishonour among Thieves
Fate of the Gods
Light Within, The
Koschei's Troubles
Quests Unlocked/Partially Unlocked by completing this Quest:
Sliske's Endgame
Items Needed to Complete Quest:
Appropriate combat gear, potions, and food.
Items Recommended for Quest:
Digsite pendant (any charge), Sixth-age circuit, and Shard of Zaros.
Items Acquired During Quest:
Charged engrammeter and Glowing orb.
Quest Points:
2
Reward:
100,000 Agility experience, 100,000 Divination experience, a tome of XP with 3 chapters each worth 100,000 experience in skill of your choice, Shard of Mah, access to Nightmare creatures as a slayer task, access to ancient memories in Guthixian caches, a Zamorak armour override, a tiny Kharshai pet, and 2 Treasure Hunter keys.
Start Point:
Speak to Kharshai in his cave beneath Rellekka.
To Start:
Enter the building North of the Great Hall in Rellekka and climb down the ladder to find Kharshai in his cave.
Instructions: 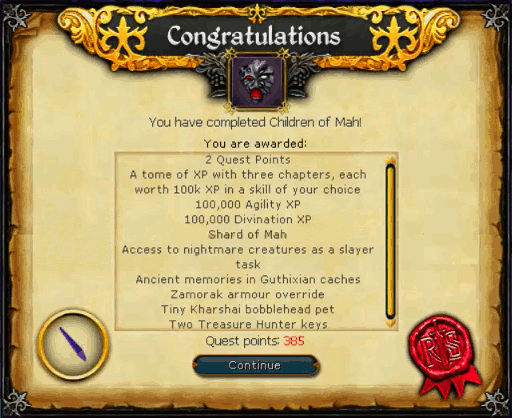