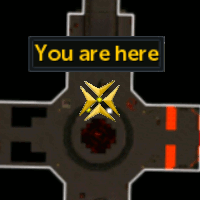 Quest:
Birthright of the Dwarves
Missing, Presumed Death
Dishonour among Thieves
Children of Mah
Sliske's Endgame
Evil Dave's Big Day Out
Examine Information:
The god of chaos.
The god of chaos has returned.
The god of power and chaos, locked in battle with his enemy, Saradomin.
He seems oddly calm considering his divinity has been stripped from him. (Sliske's Endgame)
Miscellaneous Information:
Zamorak is a former Mahjarrat who, through betrayal of Zaros, managed to attain godhood and become the God of Chaos. Along with many others of his kind, he was brought to Gielinor from Freneskae during the Second Age by the demi-gods Icthlarin and Amascut in order to aid the Menaphites in their fight against the Zarosian Empire.

After Sliske chose to turn on the Menaphites and join Zaros, Zamorak and many of the other Mahjarrat followed and would have defeated the Menaphites if it wasn't for the sacrifice of Temeken which resulted in all but a couple of Mahjarrat being destroyed. After this event, Zamorak was given the rank of Legatus Maximus in the Zarosian army and become Zaros' most trusted and feared general during the invasion of Forinthry.

Some time later, Zamorak planned and executed the betrayal of Zaros with the help of a group of fellow Mahjarrat and other allies. During this event, Zaros was impaled on the Staff of Armadyl, an Elder artefact in the possession of Zamorak. The Staff also managed to accidentally impale Zamorak. This resulted in Zaros' power being transferred into Zamorak, transforming him into the God of Chaos while forcing Zaros to abandon his body and hide within another dimension in ethereal form for thousands of years.

At the end of the God Wars, Zamorak was in possession of the Stone of Jas and used its power to turn Forinthy into the scorched and barren Wilderness that exists today. This event awoke Guthix from his sleep and resulted in all of the gods being banished from Gielinor. Zamorak was forced to reside in a rift between planes found deep below the current location of Daemonheim, which was created by a Zamorakian Mahjarrat called Bilrach in a search for his master.

After Guthix's death at the end of the Fifth Age, Zamorak was free to return to Gielinor and took part in the Battle of Lumbridge against Saradomin, which ended with him defeated and only saved from death by the general of his army, Moia.

Zamorak plays these roles in the following quests: