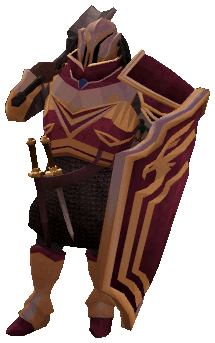 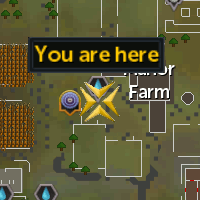 Quest:
Song from the Depths
Examine Information:
Who could move in all that armour?
A mysterious warrior clad in thick plate armour.
Miscellaneous Information:
The Raptor is one of the seven Signature Heroes. He is protective of his true identity, always appearing fully clad in armor and helm - refusing to take any of it off. Thus little is known about him. When talking to the Raptor, he will speak of monsters you have killed in quests and cast his opinion on the matter.

He can be found in the following locations. Note that many of these are neither permanent, nor stationary.

During Song from the Depths, he will travel deeper into the cave, and ultimately into the Queen Black Dragon, after you. When you are all spit out, he will even shield you from the dragonfire that follows.

Within the Player-Owned Farms, Raptor is a Large pen buyer who specifically wishes to purchase your dragons. He will purchase up to 6 for a varying amount of beans. The base value is dependent upon the animal's age and are as follows:
Note that the actual value obtained will vary depending on several other factors. From lowest to highest, these include:

Note that you will not ALWAYS find this NPC at their Player-Owned Farm location. They will need to be your current buyer for that size pen and you must have not sold them their max amount of critters.