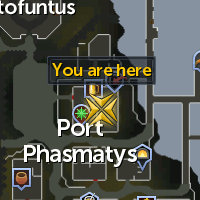 Quest:
Ghosts Ahoy
Examine Information:
A master bowman.
Miscellaneous Information:
Robin is one of the few living inhabitants of Port Phasmatys and the former leader of a gang of outlaws who eventually decided to leave him to become highwaymen under the leadership of Dirk Turnip. He now spends his time in The Green Ghost Inn playing Rune-Draw with other patrons.

During Ghosts Ahoy, you must beat Robin at a game of Rune-Draw so that he will sign an Oak shieldbow for you. You can then give the Signed oak shieldbow to Ak-Haranu who is a fan of Robin.