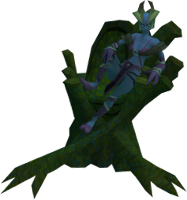 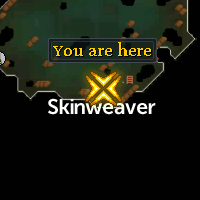 Quest:
None
Examine Information:
A rogue who can manipulate living matter.
Miscellaneous Information:
The Ramokee skinweaver is the creator of the creatures in the Polypore Dungeon. You can talk to her to learn that she left her tribe rather than be forced to become a skinweaver and eventually found a portal from the Gorajo homeworld to Zanaris. She then used the Fairy rings to come to Gielinor and after becoming interested in the magical fungi of the rings, she discovered the Polypore Dungeon and used it to imbue the creatures in the dungeon with the native fungi and its magical properties.