Quest:
A Clockwork Syringe
Pieces of Hate
Examine Information:
Posts things.
Miscellaneous Information:
Postie Pete will help you start both quests when ready. To begin them, you will need to try to enter your Player-Owned House. He will stop you just outside to deliver a letter for the appropriate quest.

He pops up in random places asking NPCs questions while delivering Letters from the Hedge.

Pete also hosts the Parcels From the Hedge members-only month long event. During such months, players have a chance while skilling to obtain Fan mail, Small parcels, Medium parcels, Large parcels, and Huge parcels. Logging in once per day also will grant the player a random parcel, which counts towards the player's “daily parcel” count (see below). Opening them will give the player Postage stamps, which functions as a currency and thus can be added to the currency pouch. Clicking postage stamps provides an option to open a shop menu, but players can only purchase items through it while at a bank. 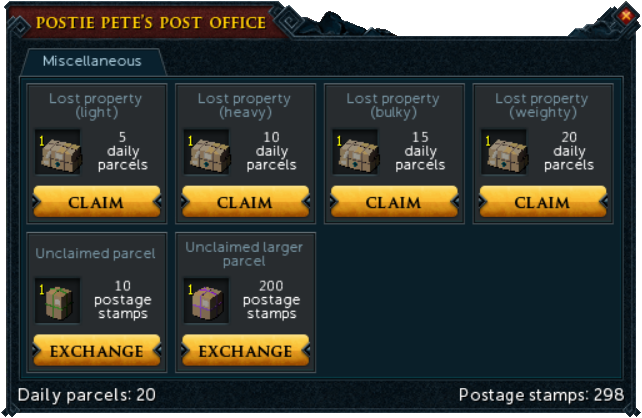 *Unclaimed Parcels will always be either a small parcel or a medium parcel.
**Like with the lost property items, after you claim a Larger Unclaimed Parcel, you cannot claim another. They can be a parcel of any size, small, medium, large, or huge.