Location:
Basement of Varrock Museum and West of the Legends' Guild. 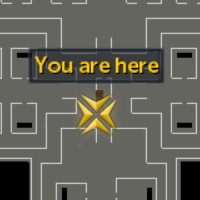 Quest:
The World Wakes
Dimension of Disaster
Examine Information:
Looks very young.
Miscellaneous Information:
When you talk to Orlando, he will ask you to read the plaques on all of the exhibits in the Varrock Museum basement. This is a quiz to test your knowledge on the creatures of RuneScape. You will receive 1000 Slayer and Hunter experience once this is completed.

One of the hard Varrock tasks is to speak to Orlando Smith after obtaining 153 kudos.

Talk to him to begin The World Wakes quest; he will be just West of the Legends' Guild. After this quest has been completed Mark Brodie will take his place in the museum, and no one will be outside of the entrance to Guthix's shrine.

In the Dimension of Disaster quest, you will rebuild the Shield of Arrav for him... you will also steal it from him a bit later in the quest.

This Data was submitted by: QueenSteffie and Star.