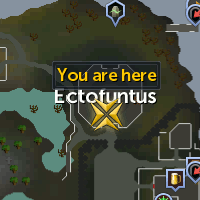 Quest:
Ghosts Ahoy
Examine Information:
An Evil Priest.
Miscellaneous Information:
Necrovarus is the ghost of a priest and powerful mage who has imprisoned and controls the ghostly citizens of Port Phasmatys.

It is revealed by Velorina at the start of Ghosts Ahoy that the port was once a rich and prosperous trading centre which brought it to the attention of Lord Drakan, who then began to demand blood tithes. Necrovarus later arrived from the Eastern Lands and convinced the port's citizens to build the Ectofunctus Temple in order to harness the power needed to create barriers around the port that would prevent Drakan's vampyres from entering.

However, the townspeople soon discovered that although they kept out the vampyres, the barriers also trapped them inside the port and without supplies they soon perished. This turned out to be Necrovarus' intention from the beginning as the souls of he citizens are trapped in the port and unable to pass on to the afterlife, allowing him to harness the power of the ghosts for his own purposes.