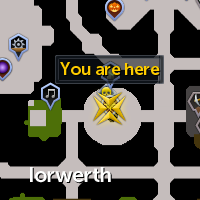 Quest:
Plague's End
Examine Information:
He looks a bit creepy.
Miscellaneous Information:
Morvran is the Prifddinas Slayer Master. 85 Slayer and at least 120 Combat are required to to be a assigned a task by him, making him the highest-level Slayer Master available. You can also talk to him to play the Rush of Blood Distraction and Diversion.

During the Elven Civil War he served his uncle, the now deceased former Lord Iorwerth, as the Iorwerth clan's Head of Intelligence, as well as been in charge of interrogation and assassinations. In fact, you witness him assassinate Idris towards the beginning of Regicide.

After the Civil War was brought to an end, he left Tirranwn to travel and eventually met Kuradal who shared her knowledge with him and convinced him to become a Slayer Master.

Morvran will bestow the "of the Iorwerth" title upon you after successfully completing 8 Dark Beast tasks for him.

The percents listed in the table are the base values. Blocking a creature will remove it and thus increase the odds for all other creatures. Preferring a creature task will double the chance for that creature.

Points are awarded by each Slayer Master upon completion of a task (note that you will only receive half of the full points reward until you have completed Smoking Kills).

Morvran needs you to retrieve several lost fragments of the goddess Seren by killing the following bosses on your own and returning the Dark crystals to him:

Note:You can also start this challenge by spending 100 slayer points per week to get this special task assigned to you.

Reward: 50,000 Slayer experience, 45 Slayer Points, A free retune of a Max Guild portal, and increases the cap which you can obtain black crystals per task by one.