Location:
Zamorak's Hideout below Daemonheim (shown right), and near Prehistoric potterington at the Ranch Out of Time. 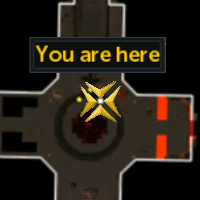 Quest:
Dishonour among Thieves
Sliske's Endgame
Evil Dave's Big Day Out
Desperate Times
Examine Information:
Zamorak's general. A mage who wields great power.
Zamorak's faithful general and left hand.
A representative of Zamorak.
Miscellaneous Information:
Moia is the half-human, half-Mahjarrat daughter of Lucien and one of Zamorak's most trusted Generals. As a half-Mahjarrat, she possesses some of their abilities and served as her father's personal assassin for centuries in an unsuccessful attempt to gain his approval.

During her time with Zamorak, he became her mentor and eventually made her a general in his army. In this position, she led the Zamorakian forces in the Battle of Lumbridge, but was eventually defeated by Saradomin. Still, she managed to save her master just before he was killed by the rival god.

Moia participates in quests in the following manner:


Ranch Out of Time:

Moia is a large pen buyer who specifically wishes to purchase your malletops. She will purchase up to 6 for a varying amount of beans. The base value is dependent upon the animal's age and are as follows:
The number of beans obtained can also be modified by several other factors. From lowest to highest, these include:

Note that you will not ALWAYS find this NPC at their Ranch Out of Time location. They will need to be your current buyer for that size pen and you must have not sold them their max amount of critters.