Location:
Running around Eastern Varrock, training a number of skills. 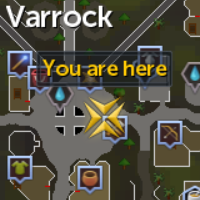 Quest:
None
Examine Information:
He's mastered the many skills of RuneScape.
Miscellaneous Information:
Max is an NPC that has reached level 99 in all of RuneScape's skills (maxed) and sells the Max cape and Max hood to players who have also maxed for 2,574,000gp.
**Update** Since the release of invention, Max no longer wears the Max cape. If you ask him about it he says sadly that he has some more training to do before he can wear it again.

Max runs a very predictable (roughly 6 minute) training route.
He trains Invention in Varrock's East bank. Runs to Horvik's where he trains Smithing and Firemaking just outside. From here, he goes to the tree patch inside Varrock castle to train Woodcutting. He then returns to Varrock's East bank to train Magic and Herblore. And finally he runs to the pottery wheel East of Aubury's to work on Crafting.

Like a normal player, he can be traded (although he will always decline) and followed. He also has a maxed combat level of 138.

This Data was submitted by: Zidane3838, and Javezz.