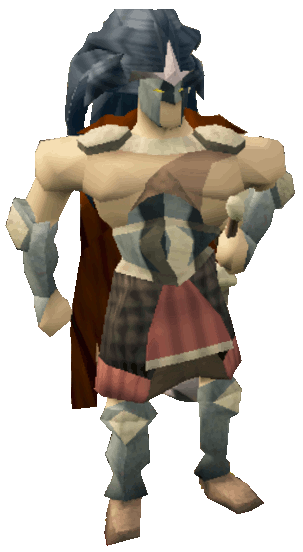 Location:
West side of the bank.

Quest:
None
Examine Information:
A collector of ancient artefacts.
Miscellaneous Information:
Madrith is a man of many talents and below are all the ways he can help make you a better warrior and equip you with weapons of death:

Mandrith, along with his brother Nastroth, will buy any of the Ancient artefacts dropped by Revenants or the Chaos Elemental. He will not buy them in noted form and does not buy any of the ancient weapons/armor. The table below lists the artefacts that he will buy and the buy price. Each artefact has a high alch value that is less than the sell value so it is always worth selling them to Mandrith or Nastroth.

Mandrith is the Wilderness Slayer Master. He only provides tasks for slayer monsters in the wilderness and they must be completed only in the wilderness. His tasks are called "Slayer Bounties" and function as normal slayer task do. Slayer Points

Mandrith awards Slayer points in the same way as all other Slayer Masters except he uses a separate counter. Mandrith ignores your normal slayer task count and starts a new one himself. Completing tasks for Mandrith will not change your normal slayer task count and vice versa but you may only have one active slayer task regardless of the Slayer Master. Mandrith requires you complete 4 tasks for him before he will provide any slayer points.

The table below outlines the points awarded by each Slayer Master upon completion of a task (note that you will only receive half of the full points reward until you have completed Smoking Kills).

To gain potential on a Bounty Emblem it must be in the players inventory for every kill of a Wilderness Slayer Task. There are two ways to get a t1 bounty emblem. If you have Slayer Bounty points it will cost 50 points or you can complete one task for Madrith and he will provide it to the player. To upgrade the Bounty Emblem the player must complete "Bounties" or slayer tasks from Mandrith. Each completed task adds 100 potential to the emblem. The emblem will auto upgrade upon reaching the required potential, see the chart below to see the potential required to upgrade for each level.

The emblem can be turned in at any level to get either Slayer Bounty Points or Deathmatch Points to spend in their respective shops (Slayer Bounty Rewards Shop or Deathmatch Rewards Shop). The chart below shows the point totals gained when turned in at each level. Each additional level provides a large increase in points when redeemed but also provides larger risk when in the wilderness as being killed with it will loose more potential.

Requirements:
Mandrith's Slayer Challenge is to kill 15 of each of his possible slayer task monsters. Additionally, you may kill each of the wilderness bosses for an additional reward. Slayer Monsters: 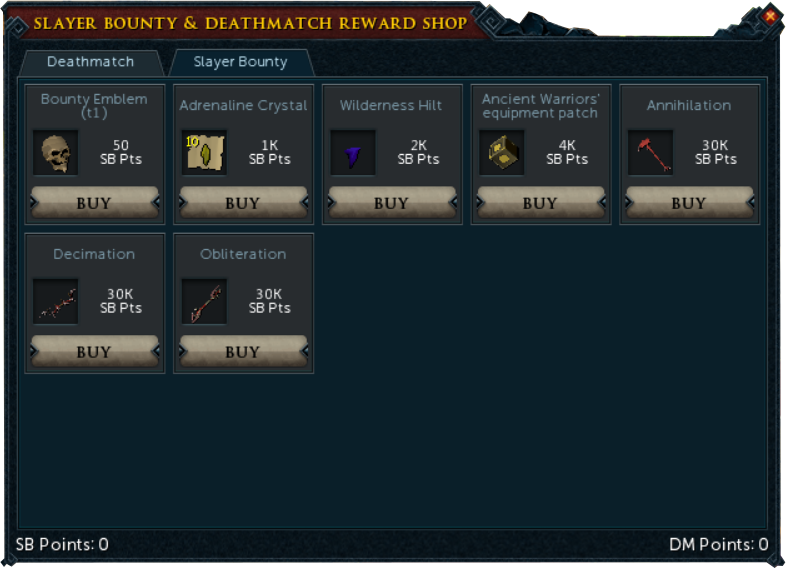 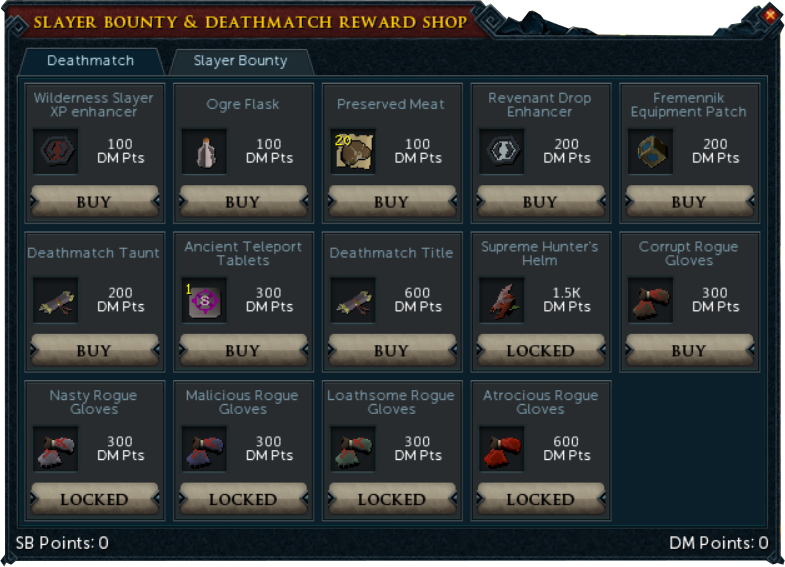 This Data was submitted by: ChathMurrpau and Ksb Single