Location:
Southwest room of the dungeon below the Mourner Headquarters in West Ardougne. 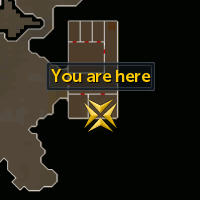 Quest:
Plague City
Mourning's Ends Part I
Mourning's Ends Part II
Within the Light
Plague's End
Examine Information:
A Mourner showing his true identity.
Miscellaneous Information:
The Head Mourner is the head of the Priddidinas Death Guard, otherwise known as Mourners, and one of Lord Iorwerth's commanding officers. He has been tasked by Iorwerth to find the Temple of Light beneath the mountains to the west of Ardougne in order to harness its power to bring back the Dark Lord.

During the elf quest series you will discover that Lord Iorwerth and King Lathas have faked a plague in West Ardougne in order to quarantine the city and use the Death Guard, led by the Head Mourner, to take control of it and therefore allowing them to use its citizens as slaves to dig a tunnel to the Temple of Light.

During Plague City you will learn that he has imprisoned Elena to stop her learning that the plague is a hoax.

During Mourning's Ends Part I you infiltrate the Mourners to find out what they're up to and must poison the citizens of West Ardougne at the orders of the Head Guard in order to provide more slaves.

During Mourning's Ends Part II you will discover the Temple of Light and complete a very complex puzzle in order to seal the temple and prevent the Death Guard from using its power.