Location:
Her house in the northwest corner of East Ardougne. 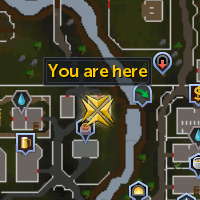 Examine Information:
She doesn't look too happy. (Imprisoned)
She looks concerned.
Miscellaneous Information:
Elena is a healer from East Ardougne who has recently being trying to research the plague reported in West Ardougne and care for the sick citizens.

During Plague City you are enlisted by her father, Edmond to find Elena who has gone missing while in West Ardougne. Once in the city yourself, you will learn that she has been abducted by the Mourners who are supposedly plague healers and the remainder of the quest is spent trying to locate and ultimately free her.

During Biohazard Elena will ask you to obtain her Distillator which was confiscated by the Mourners and return it to her. Once done, she will use it to obtain a Plague sample and ask you to deliver it to her mentor, Guidor who will determine that there is no plague and Elena will work out that it must be a hoax.

During Mourning's Ends Part I you are tasked by the Head Mourner to poison the citizens of West Ardougne and must talk to Elena to learn how to make a non-lethal poison.

During Plague's End you will enlist Elena's assistance in organising an uprising of West Ardougne's citizens against the Mourners.