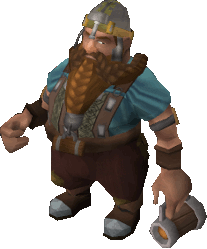 Location:
East Keldagrim, in the house located directly northeast of the Kebab seller. 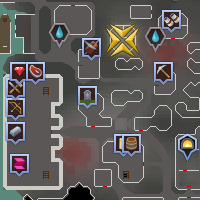 Quest:
Forgettable Tale of a Drunken Dwarf
Heartstealer
Examine Information:
He's had a fair bit to drink...
Miscellaneous Information:
There is broken glass all over the floor in he's house, and he's drunk.

Drunken Dwarf plays a vital role in Birthright of the Dwarves Quest. After defeating Hreidmar and Grimsson, Veldaban says that he doesn't like what he is turning into, and he requests the player to kill him in order for the effect to stop. If you choose to kill Veldaban, then you have the option of allowing the consortium to rule, or finding the true heir to the throne. If you choose the second option, Drunken Dwarf then becomes the King of Keldagrim, being crowned as King Drunken Dwarf III. He can then be found at the top of Keldagrim Palace.

During Heartstealer, you will need to obtain 4 drink tokens in order to bribe him to make a distraction for you.

This Data was submitted by: Alk12, Sumurai8, DJ Phox, and Jarkur.