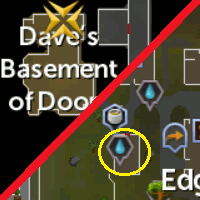 Quest:
Evil Dave's Big Day Out
Examine Information:
Ryan - Ryan, a motivated and excited rat. Key traits include - Love, Passion and the ability grind at even the most laborious of tasks.
Kevin - Kevin, a small but smart rat.
Terry - Terry, a moody rat. Its fur is slightly orange and smells like chocolate.
Pamela - Pamela, a loud rat. Often found in the corner shouting; ALAN! ALAN! ALAN!
Alan - Alan, a rat. Usually found shouting and being angry at almost everything he comes across.
Darren - Darren, a brave and determined rat. Despite being blind his bravery puts him at the top of his class.
Miscellaneous Information:
There are several Hell-Rat children scurrying about the South end of the basement. You must recruit any 3 of them to form your Doom Squad during Evil Dave's Big Day Out. To recruit them, click the Hell-Rat you want, this will open an interface asking if you wish to recruit them after telling you their name.