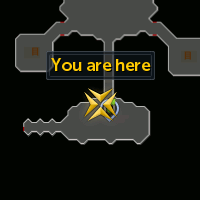 Quest:
Smoking Kills
Examine Information:
A slayer slain.
Miscellaneous Information:
Catolax is the ghost of a dead Slayer Master who in life came from the city of Ullek, which was destroyed during the God Wars and whose ruins can be found in the swamps east of Sophanem. A Ghostspeak amulet is required to talk to him.

During Smoking Kills, you are sent to Catolex's tomb in the ruins of Ullek by Bob the cat in order to learn how to make Masked earmuffs so that you can safely enter the well in the centre of Pollnivneach. At this point Catolax is unable to communicate properly and can only talk when he is asked a question.

At the end of the quest, Catolax is able to communicate more freely and will inform the player that he was killed by the goddess Amascut and she bound his spirit to his sarcophagus, preventing him from passing into the afterlife. However, her power over his spirit has now weakened and he is also able to reveal that Sumona is in fact Amascut in disguise and she planned to kill the player in the well.

After the quest, he can be found inside the Pollnivneach Dungeon and provides information on the monsters found there.