Location:
South of the Braindeath Distillery. 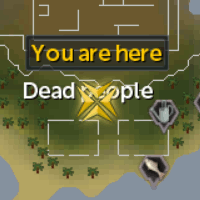 Examine Information:
I wonder if it was all the 'rum' that pickled him?
Miscellaneous Information:
Captain Donnie is a zombie pirate Captain who has, along with his crew of Zombie pirates and Zombie protesters, laid siege to Braindeath Island's rum distillery and set up a protest as it has stopped production and they demand that it restarts.

During Rum Deal, you must get Captain Donnie drunk by giving him some Unsanitary swill after which he will agree to stop the protest as long as the pirates get their rum and reveals that he is actually working for someone named Rabid Jack.

In Rocking Out, you will need to trick him into thinking that you are a new undead pirate.

During Pieces of Hate, you will need to have him give you 100% Luke's leg before you let him storm off to give Mi-Gor a piece of his mind.

This Data was submitted by: Fivestar24, Bobby, Javezz, and ChathMurrpau