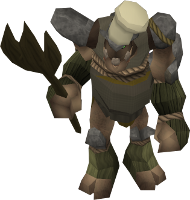 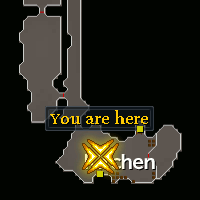 Examine Information:
Human is his specialty.
Miscellaneous Information:
Burntmeat is a mountain troll chef who specialises in cooking humans, although he always burns it and rather than being named after what he first tried to eat like other trolls, he's named after the first thing he attempted to cook.

During Eadgar's Ruse Burntmeat will ask you to bring him a human to cook in exchange for location of the Troll Stronghold's Goutweed supply. However, rather than using an actual human, you'll make and use a Fake man to trick him.

During My Arm's Big Adventure Burntmeat will ask you to teach his assistant, My Arm how to Goutweed as the trolls' supply has run out and they can't find any more for seasoning their food.

During The Mighty Fall Burntmeat can be found in the Dorgeshuun Camp in Yu'biusk as he's come to cheer you on during the Kyzaj Tournament.