Location:
His ship in Port Phasmatys harbor (pictured), The Green Ghost Inn, The Other Inn, or Harpoon Joe's House of 'Rum'. 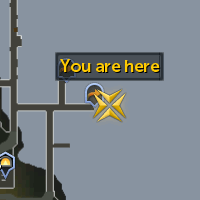 Quest:
Cabin Fever
Rocking Out
A Clockwork Syringe
Pieces of Hate
Examine Information:
Bill Teach the pirate.
Miscellaneous Information:
Bill teach is a pirate from Mos Le'Harmless who can first be found in The Green Ghost Inn in Port Phasmatys and later on board his ship, The Adventurous, at the most Eastern dock in the port. After you are aware of Mos Le'Harmless', he can take you there on his ship. Bill can also be found on board the ship at Mos Le'Harmless' docks, in The Other Inn, or in Harpoon Joe's House of 'Rum' on the island.

During Cabin Fever, you must help Bill escape from Port Phasmatys on board The Adventurous and sail to Mos Le'Harmless without being sunk by enemy pirate ships.

During Rocking Out, you must obtain Bill teach's mark from Bill, along with those of several other pirate captains in order to obtain information about Rabid Jack from Young Ralph inside Rock Island Prison. Post-quest, you can obtain a Magical cage to unlock the Ex-ex-parrot.

During A Clockwork Syringe, you must take the Zombie head obtained after defeating Barrelchest Mk II to Bill who will then ask you to obtain a Twiblick night special from Captain Braindeath in order to make the head tell you where the Barrelchests are being made.

And lastly, in Pieces of Hate, it seems our story is coming to a close. You and your scurvy friends are closing in on that trouble maker Rabid Jack. Will this be the end of his attacks?