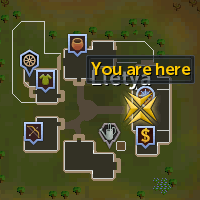 Quest:
Regicide
, Mourning's Ends Part I
, Mourning's Ends Part II
, Within the Light
, Plague's End, and The Light Within.
Examine Information:
An odd-looking person. The lord of Clan Cadarn.
Miscellaneous Information:
Arianwyn is the leader of the elven resistance against Lord Iorwerth and his clan. Throughout the elven quest series you will help Arianwyn on several occasions in his fight against the Iorwerth clan with an aim to brining an end to the ongoing elven civil war.

At the end of Regicide Arianwyn stops the player before they can deliver a Message from Lord Iorwerth to King Lathas and will break the seal on the message and tell you to read it. This reveals that you have been tricked by both men into helping them with their plan to destroy Camelot and Arianwyn will ask you to become his inside man and help the resistance.

During Plague's End it is revealed that Arianwyn is actually Lord Cadarn and you must help him and the other elven clan lords re-grow the crystal city of Prifddinas to prevent Lord Iorwerth from summoning the Dark Lord.

After the quest he can be found near the Cadarn Herald in Prifddinas in addition to Lletya.