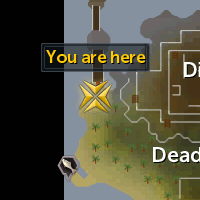 Quest:
Rum Deal
Rocking Out
Examine Information:
Most of an angry undead sea scoundrel.
Miscellaneous Information:
50% Luke is a zombie pirate who, as his name would suggest, is missing 50% of his body due to an unfortunate accident at sea involving a spiky reef. However, after this accident his captain was able to craft a replacement for the missing half of his body from the ship's Witchwood planks.

During Rum Deal, you will need to sneak past him in order to get to the stagnant lake on the north side of Braindeath Island.

During Rocking Out, you will need to use an Order form on his leg with a piece of Charcoal in your inventory. This will give you a Charcoal rubbing.

This Data was submitted by: Fivestar24, Bobby, and Javezz.