0125
Watchtower
Description:
An increasingly amount of ogres have been seen near Yanille and has the wizards buzzing. They need your help recovering their power crystals which were stolen to stop the hordes of ogres from causing harm to the city.
Difficulty:
Intermediate
Length:
Long
Quest Requirements:
None.
Skill/Other Requirements:
14 Herblore
14 Magic
15 Thieving
25 Agility
40 Mining
Must defeat level 68 monsters.

Quests Unlocked/Partially Unlocked by completing this Quest:
Monkey Madness II.
Items Needed at Quest Start:
None.
Items Needed to Complete Quest:
20gp+ (be sure to bring more if you you're not so good in agility!), 1 Gold bar, 1 Lit candle (obtained during quest), 1 Death rune, Pickaxe, Dragon bones, Bat bones, 1 Jangerberries (obtained during quest), 2 Ropes, Guam leaf, Vial of water, Pestle and mortar. (Food, armour, weapon and Anti-dragon shield is very useful!). An item to cut spider webs is needed, a knife or sword works, if using melee that weapon should be fine. This is a lot of items, but make sure to have room for around 7 or 8 extra items.
Items Recommended for Quest:
Ring of dueling (8).
Items Acquired During Quest:
None.
Quest Points:
4
Reward:
5000gp, 15250 Magic exp, ability to use Level 58 Watchtower teleport.
Start Point:
Watchtower close to city gates of Yanille.
To Start:
Speak to Watchtower Wizard.
Instructions: 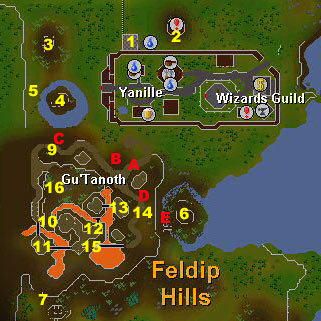 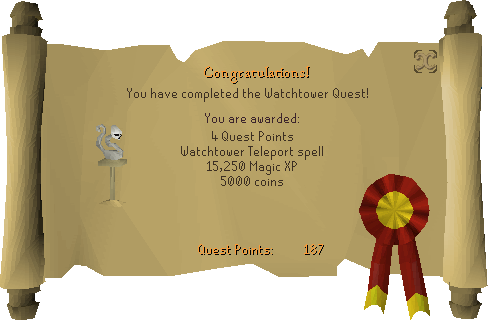