0118
Throne of Miscellania
Description:
King Vargas of Miscellania is not well. A curse has caused him to become somewhat of a monster. This won't help the new rumors circulating about the fate of his kingdom. He'll need a new regent to look after the welfare of his people during the course of his new "condition." However, you'll need to prove yourself worthy of royalty first.
Difficulty:
Experienced
Length:
Medium
Quest Requirements:
The Fremennik Trials
Heroes' Quest
Skill/Other Requirements:
You will need one of the following skills to gather support:
30 Mining
35 Herblore
45 Woodcutting
35 Fishing.
Quests Unlocked/Partially Unlocked by completing this Quest:
Royal Trouble
Items Needed at Quest Start:
Flowers (any kind), Iron bar, Unenchanted ring, Logs, and an Axe/Rake/Harpoon/Lobster pot/Pickaxe.

In addition to the above:

Male players will need to bring a Bow they are willing to lose, except Magic and Composite bows.
Female players will need to bring a Cake.
Items Needed to Complete Quest:
None.
Items Recommended for Quest:
None.
Items Acquired During Quest:
Awful anthem, Good anthem, Treaty, Giant nib, and a Giant pen.
Quest Points:
1
Reward:
Your very own kingdom to manage! and 10k gp (speak to the adviser, select see how you're going, and in coffers there is 10k, withdraw it).
Start Point:
Miscellania, take the ship from Rellekka.
To Start:
Speak to King Vargas.
Instructions: 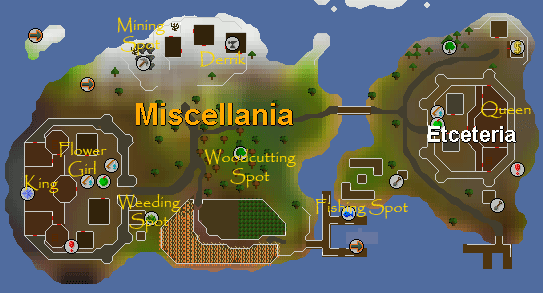 Note: For more information on how to manage your kingdom, please check the Kingdom Management guide.