0083
One Small Favour
Description:
"Can you do me one small favour?" That's one question that never ends well. Deep south of Karamja Island lays Shilo Village where Yanni Salika owns an antique store. He is always busy with his items and checking out new stock from adventurers. If you have a moment, he needs you to do just one tiny thing for him.
Difficulty:
Intermediate
Length:
Long
Quest Requirements:
Rune Mysteries
Druidic Ritual
Shilo Village
Skill/Other Requirements:
Level 25 Crafting
Level 18 Herblore
Level 36 Agility
Level 30 Smithing
Must defeat a level 92 Foe
Quests Unlocked/Partially Unlocked by completing this Quest:
Swan Song
King's Ransom 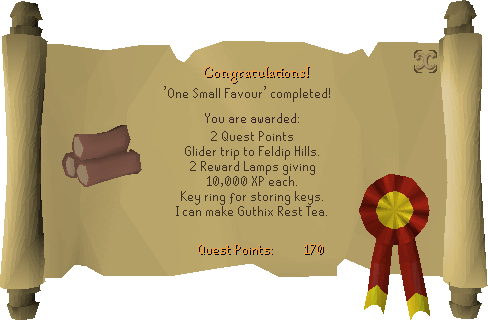 About the rewards: The lamps work just like genie lamps, except they give 10000 experience to the skills you choose. Note that the lamps will only work on skills that are at least Level 30! They cannot be banked on a member server (but can on a free server.)

The key ring is a very convenient item. It clears out some of your bank by allowing you to store all your important keys on it. Quest keys that are meant to be used only once cannot be added to it, but a key given as a reward for a quest can be added. Eligible keys include a Brass key, Battered key, Crystal-mine key, Dusty key, Key (Phoenix Gang weapons store), Maze key, Metal key, Shiny key, and Wrought iron key.

You use the arrows to scroll through the keys, and if you wish to remove a key to use it, simply select "Remove this key". It is also possible to just Use the keyring on the relevant door (without removing the key from it). If you lose the key ring, you can buy a new one for 500gp, but it will not include any keys.