0081
Observatory Quest
Description:
What secrets lay in the skies! But you'll never know about them if the observatory doesn't get fixed. Apparently a family of goblins live nearby and they ransacked the place. Can you help the professors fix it with your crafty skills?
Difficulty:
Novice
Length:
Short
Quest Requirements:
None
Skill/Other Requirements:
10 Crafting
Be able to kill a level 42 guard
Items Needed at Quest Start:
Bronze bar, Molten glass, and 3 Planks.
Items Needed to Complete Quest:
None.
Items Recommended for Quest:
Normal or Super Antipoison potion (4) (Can be found when climbing down the ladder).
Items Acquired During Quest:
Goblin kitchen key, Lens mould, Lens
Quest Points:
2
Reward:
2250 Crafting XP, a Jug of wine, a random reward depending on what constellation you see and an Astrology book.
Start Point:
Observatory reception, southwest of Ardougne (East), west across the river from the Tree Gnome Village.
To Start:
Speak to the Observatory Professor.
Instructions: 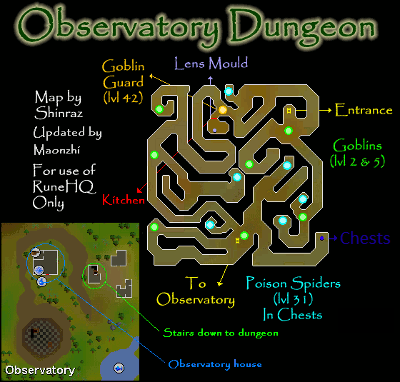 When the Observatory Professor has given you your reward look through the telescope again and you will see the constellation Scorpio. Head back to the professor's house and talk to the Observatory assistant. He will give you a Jug of wine and mention the Astrology book on a nearby table.

Read the book to find information about Scorpius grave. Travel north of the observatory to Zamorak worship site. Southeast of the site, you will find the Spirit of Scorpius, wandering around a grave. He will give you an Unholy mould and tell you to return when you are worthy. Use the mould and a Silver bar at any furnace to make an Unstrung emblem. Now use the emblem with a Ball of wool to create an Unpowered symbol. Return to the grave and the spirit will bless the symbol, making it a Unholy symbol (Zamorak).