0007
Goblin Diplomacy
Description:
What are the goblin generals arguing about now? Solve the dispute so the world of Runescape doesn't have to worry about a goblin war.
Difficulty:
Novice
Length:
Medium
Quest Requirements:
None.
Skill/Other Requirements:
None.
Quests Unlocked/Partially Unlocked by completing this Quest:
The Lost Tribe
Recipe for Disaster
Items Needed at Quest Start:
None.
Items Needed to Complete Quest:
2 Woad leaves*, 3 Redberries*, 2 Onions*, 3 Goblin mails (can be obtained during the quest), and 15 Coins (35 if you don't have Woad leaves).

Important Note: You can buy an Orange dye and a Blue dye from the Grand Exchange instead of items marked with an asterisk (*), making this a much shorter quest.
Items Recommended for Quest:
Amulet of glory* (Charged) and Falador teleport*. 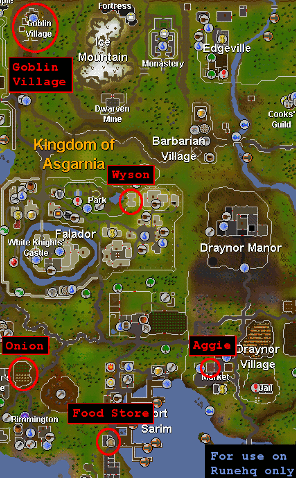