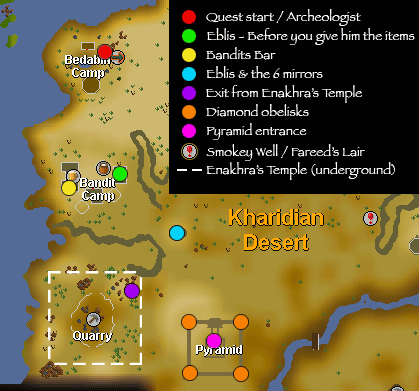 If you have completed Eadgar's Ruse, use Trollheim Teleport to reach the ice gate. If you have not done the quest, you must walk from >Burthorpe. This method of travel requires that you wear climbing boots. 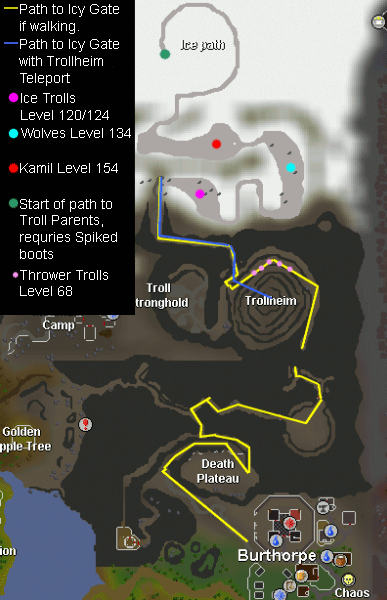 Fighting Damis: A full inventory of sharks or prayer potions; your best armor and weapon - It is highly recommended to kill Damis from behind the stalagmite at the northern safe spot shown in the map below using ranged or magic to make this fight much, much easier as he cannot hit you.
If you would prefer to melee Damis, then you must make sure you keep Protect from Melee active at all times. Damis' second form will drain 2-4 Prayer points with every hit (even 0s), so make sure you drink Prayer potions to keep your prayer active otherwise he is capable of hitting over 25.

If you are carrying a diamond around during the quest, a level 95 stranger may attack you. He uses a Dragon dagger (p) and attacks very quickly and specials often. Dispose of him anyway you see fit.

You should note that this does not happen to everyone, although for your safety it is recommended that you carry an antipoison in your inventory when you are carrying a diamond.

Items needed: Boots of lightness, 8-12 Energy potions (4), 1-2 Prayer potions (4), 1 or 2 pieces of Food, Antipoisons. You want to keep your weight under 0 or as close to 0 as possible. Just turn run on and Protect from Melee prayer. Drink energy/prayer pots when needed. Mummies will not hit through your prayer and your low weight will minimize the times you fall out.
If you have a Camulet, use it to Teleport close to the Pyramid.
Note: Refer to our Desert Treasure Pyramid Map for help getting through.

How to change spells, from ancient to regular spells and visa versa. After you have completed the quest you will be able to cast new spells, such as teleports to places like Ice Mountain, the graveyard in Level 19 Wilderness, Canifis pub etc, you will also get new attack spells. You can get a new staff by killing Mummies in the pyramid or by buying one off Eblis (at the 6 mirrors) for 80,000gp.

If you want to switch back, so you can cast the regular spells, you will need to go back to the pyramid. Don't worry; you won't need to go all the way through it again. Just go to the back of it, go through the tunnel.

When you went through the tunnel you will get into the room where you completed the quest. Here you will see a altar.