0009
Knight Training
Description:
Test your might against the greatest warriors of the round table.
Requirements
Completion of King's Ransom Quest, High combat level (90+) is vital to success, but not necessary to play.
Items Needed:
None.
Items Recommended:
Stat restore potions, Super potion sets, Food, Good Armor and Weapons (see Equipment Section).
Rewards:
20k experience in Attack, Defence, Hitpoints, and Strength as well as access to the Chivalry and Piety prayers.
Starting Point:
Talk to the Squire at the top of Camelot Castle.
Instructions:

Note: This is a safe mini-game and you will not lose your items when you die.

*Prayer, Range, And Magic are not allowed to be used while playing, and stats get drained every time you get hit.* 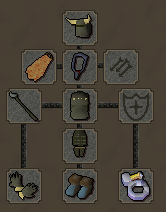 After speaking to the squire at the top of Camelot castle, open the doors near him to begin playing.

The Rewards
After completing the challenge you will receive 20k experience in Attack, Defence, Hitpoints, and Strength along with access to two new prayers.

You will also gain the option to set your respawn point to Camelot by speaking to Merlin in his workshop.

After completion you are not allowed to reenter the training grounds.