0051
TzHaar Fight Cave
Description:
The TzHaar Fight Cave is an advanced area in RuneScape introduced in October 2005. It is a combat minigame in the Karamja volcano. Up until this update, the Kalphite Queen had been the most powerful of all creatures within RuneScape
Skill Levels Required:
None.
Quests Required:
None.
Items Needed:
Combat equipment (see Recommended Gear).
Skill Levels Recommended:
70+ Ranged and 60+ Prayer.
Items Recommended:
See Recommended Gear.
Is this MiniGame Safe to play?:
Yes
Getting Started:

On the 3rd of October 2005, Jagex released an addition to the new TzHaar Volcano District of Karamja. 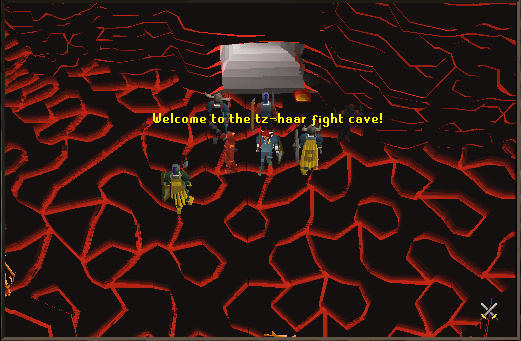 Where is the Fight Cave? 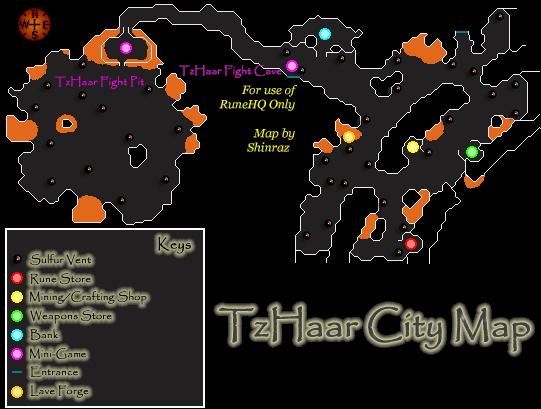 Map of The Fight Cave: 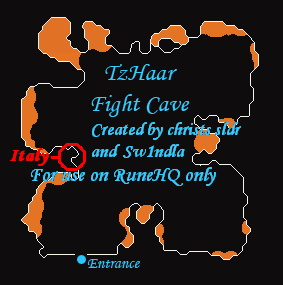 Having 108+ Combat, 80+ Range, and 60+ Prayer as well as a set of Guthan armor is definitely recommended.

The fight cave is where you try to last as long as you can inside the cave. You will start off by being attacked by a small group of bats (Tz-Kih), which are level 22. Eventually as you continue to progress in your killing spree, you're foes get harder. The last foe you will fight will be a Level 702 monster (TzTok-Jad), which is the boss. There are 63 waves of enemies in all and the game averages 2-3 hours.

The cave is a multi-combat area and if you happen to die (you most likely), you will not be sent to Lumbridge (or Falador) or lose any items. This mini-game is like the Fight Pits. You have nothing to lose!

NOTE: You are not allowed to use Dwarf Multi-Cannons in the Fight Cave!

Note: Logging out
When you log out while doing the Fight Caves, it saves your progress for when you log back in, and you continue on the next wave of monsters. When you press log out, a message comes up that says if you log out before you have finished the wave of monsters, your progress will not be saved, but if you log out after the wave of monsters, it will. To save your progress, kill all the monsters in the cave, and it will come up with "You cannot log out until 10 seconds after combat". This makes you sure that you have killed every monster, and it is safe to log out. It is not advised to log out during the waves of level 360's onwards, as you may not be able to switch your prayer on in time, and get hit for up to 50 damage.

Of course there is a reward, and what better than Tokkul? The longer you last the more Tokkul will you receive. After killing the boss, the tzhaar outside will reward with a new Fire Cape and 8032 Tokkul.

HP: 10
Attacks: Melee
Threat Level: High
Notes: Every time a Tz-Kih attacks you, your prayer will be lowered by the damage it hits plus one.

HP: 20
Attacks: Melee
Threat Level: Low
Notes: Whenever you damage a level 45 Tz-Kek with melee, you will be hit for 1 HP damage in return. This does not count for range or mage attacks.

HP: 80
Attacks: Melee
Threat Level: Medium - High
Notes: Yt-Mejkots can heal themselves and other monsters for 10 HP at a time, but only if you are standing in a position where they can attack you. They are only dangerous if you let them be. 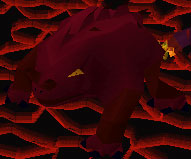 HP: Estimated 160
Attacks: Melee, Magic
Threat Level: High
Notes: Ket-Zek is harmless if you stand where it can't melee you and have Protect From Magic on. 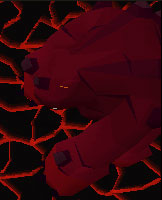 HP: Estimated 360
Attacks: Melee, Magic, Range
Threat Level: Extremely High
Notes: At half health, 4 Level 108 healers will come. For strategies, go to the section deticated to the beast. Contrary to popular belief, the Ring of Stone is USELESS in this fight.

Note: you must have atleast level 70 ranged and defence to wear this armor set.

A combination of the following:

In the levels leading up to the boss fight, you will be swarmed by many types of monsters all at once. This can be overwhelming if you don't know what your doing, but luckily, you have this guide!

This rock formation (shaped like Italy and thus named) is perhaps the most useful terainial advantage you have. Enemies can be stuck on both the Northern and Southern sides and become free to range. It is especially useful for dealing with those pesky Yt-Mejkots. It will later be a huge part of your final battle with TzTok-Jad.

On October 17th, 2005... a mere two weeks after the release of the fight caves, Jagex increased the attack range of TzTok-Jad. With a little luck, Players were able to render TzTok-Jad harmless and helpless, Jagex wouldn't allow this.

With his new attack range, TzTok-Jad could kill you before he even appeared on the mini-map. This was discouraging to many Fire Cape hunters, but a few die hards stuck with it, and eventually found a solution.

InuYasha3336 found a way to approach the beast so it could be fought fairly.

TzTok-Jad has three attacks, a range attack, a magic attack, and a melee attack. Any one of them can kill you with one hit. The goal is to range him while carefully watching his movements, predicting his attack, and activating the correct protection prayer. Apparently he will not approach you so as long as you stay a few steps from him you can disregard his melee attacks. His movements will indicate wether he is going to range or mage and you must react EXTREMELY QUICKLY by switching to the correct protection prayer before the attack launches.

Mage attack: TzTok-Jad stands on his hind legs for a few seconds before shooting fire at you, Protect From Magic must be activated in the time he is on his hind legs, before he shoots the attack, or it will still hit.

Range attack: TzTok-Jad stands on his hind legs and comes down, slamming the ground with his front legs, you have a few seconds between the impact of his legs hitting the ground before the attack hits, Protect From Range must be activated during that time.

If you manage to get him to the half way marker 4 level Yt-HurKots (level 108) will appear. They do nothing but heal the 702 unless you attack them. Killing them is pointless; they will only respawn again as soon as you bring TzTok-Jad back to half health. You have to shoot them all once, they will stop healing TzTok-Jad and try to attack you. If you manage to get them stuck behind TzTok-Jad, they will sit there for the rest of the fight. Any who are free will attack you, but they dont hit very high and it is a much better choice than trying to kill the boss with them on healing patrol.

Once the Yt-HurKots are distracted, continue fighting TzTok-Jad as normal and the fire cape will be yours!

Fight 30
Enemies: Yt-Mejkot (180) x 2
Importance: If you are low on health and opted to bring the Guthan set, you can use this fight to heal yourself. Simply turn on protect from melee, equip your Guthan, and stand where they both can attack you. Once one of the Yt-Mejkots reach half HP, they will both begin healing it, so nothing stops you from recovering your health to full. Take advantage of this trick, it can only be done in 2 fights.

Fights 31-62
Enemies: Ket-Zek (360), Various Others
Importance: These fight feature the second most fearsome creature in the pits, Ket-Zek. As soon as you hear the intro to the next level theme music, turn on Protect From Magic, if you dont, you can be hit up to 47! Don't turn off Protect From Magic until Ket-Zek falls, and be prepared to turn it on when the last enemy falls.

Fights 38-45 and 53-60
Enemies: Tok-Xil (90) x 1 or 2, Ket-Zek (360), Various Others
Importance: These fights pit you against Tok-Xil and Ket-Zek monsters at the same time, the combination of Range and Magic can be quite devestating if you let it. One of the first things you should do once these fights start is seek out Tok-Xil and kill it. Tok-Xil is the weaker of the two and should be taken out quickly to prevent damage from building up.

Fight 61:
Enemies: Yt-Mejkot (180) x 2, Ket-Zek (360)
Importance: Like in Fight 30, the dual Yt-Mejkots can provide excellent health restoration if you brought Guthan. Simply get the two healers stuck behind Ket-Zek and dispose of it with protect from magic and arrows. Once Ket-Zek is out of the way, turn on protect from melee and equip your Guthan. The chances of killing either Yt-Mejkot is slim as when one reaches half health, they will both heal it. As long as they live and you have protect from melee on, you can continue beating on them and stealing their life with no threat. This is quite useful for the oncoming boss fight and it is suggested that you do not kill them unless you have full health, youll want it.

Fight 63:
Enemies: TzTok-Jad (702), Lvl 108 Healers x 4
Importance: This is the final fight, It can be nerve racking, but if you keep a level head and follow the strategy, you'll have your very own fire cape soon enough.

Well that sums it up. It may not be the best way, but everything up to the 702 works from experience. All the strategies from the 702 are based on discussions with high-level players who have actually fought him, no vague rumors. Hope that helps you all, and good luck.