0040
Tai Bwo Wannai Clean Up
Description:
Upon the completion of the Jungle Potion Quest, you will be able to find out that the Tai Bwo Wannai villagers are in need of a hand to fortify their defences as their wooden fence has rotten out! In this activity you will be required to make use of your Woodcutting skil knowledge to rebuild the fence and to help the villagers, and of course, in exchange of some awesome rewards!
Skill Levels Required:
At least 10 Woodcutting.
Quests Required:
Jungle Potion.
Items Needed:
Machete (of any kind), Food, Armor, Weapon, Antipoison potions, and Relicym's Balm.
Skill Levels Recommended:
At least 35 Woodcutting to have access to all the types of jungle available, and 16 Cooking for those who wish to cook Spiders on a stick.
Items Recommended:
Pickaxe, Spade, Prayer potions (unless you have completed the Tai Bwo Wannai Trio quest), an Anti-poison totem, Gem bag, and Normal or Super Restore potions.
Starting Point:
Murcaily, found roaming in front of the Mahogany and Teak trees area.
Is this MiniGame Safe to play?:
No
Getting Started:

Description: The villagers of Tai Bwo Wannai have returned since some brave adventurers resolved the Jungle Potion Quest, but they're not happy about the jungle encroaching back into the village or the run-down rotten fencing. If you happen to be passing through Tai Bwo Wannai, would you mind giving the local villagers a hand? You can train your woodcutting skill and who knows what you might find as you're hacking away with your machete? And the locals are always grateful, rewarding you for the favours you perform so you can really enjoy what the village has to offer.

You must talk to Murcaily, who is found next to the Mahogany and Teak tree area. He will explain the things you can do here. After you have talked with him, you will need to get a machete. You can buy normal ones from the shop north west of Tai Bwo Wannai. Machetes will allow you to cut three different types of jungle. The woodcutting levels needed to cut them are 10 for light, 20 for medium, and 35 for dense. The easiest to cut is the light jungle, then the medium, then the dense. The different types of jungle can be determined by the colors.

As you're cutting the jungle back, you'll start to earn Favour. Favour is shown to villagers around the village to earn Trading sticks. Your favour can be found in the top right hand corner of the screen.
This is what your Favour meter should look like: 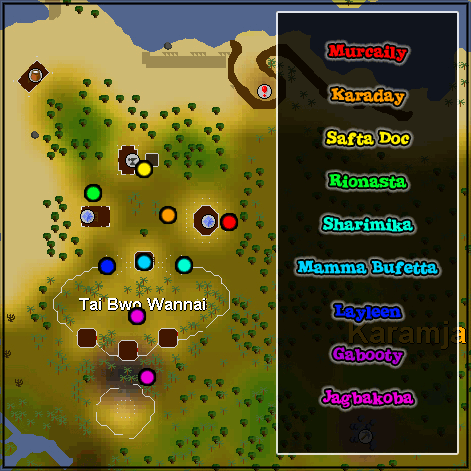 The villagers that give you the sticks are the ones that have sticks in their hands. Once you tell them that you've been doing work around the village, they will not give you more sticks for another 10-20 minutes.

He gives you the information on events and monsters in jungle.

She tells you about Spider on a stick.

Rionasta, the local postmaster. First, ask him "What do you..." and then he'll tell you what he does. It costs 10 Trading sticks per item that you wish to send.

He runs the village shop, which will be explained later in this guide.

To help speed up the time spent cutting at one jungle, Safta Doc has constructed Gemmed machetes. Each one is a little stronger and faster as the gem gets higher.

This is the beginner gem machete.

This is the moderate gem machete.

This is the expert gem machete.

Enemies during the mini-game

While you're cutting the jungle, you may disturb enemies in the process. These enemies include Mosquitoes, Tribesman, Broodoo Victims, Bush Snakes, and Jungle Spiders.

There are three types of Broodoo's: Blue, Green, and Yellow. All three colors are level 60, have high defense, and use weakening spells to harm you, not physical attacks. Using their weaknesses saves you lots of time and not so much moving. Once you defeat one of the Broodoo's, they will drop a Broodoo mask. These can be used with 2 Snake skins and 10 nails to make into a shield, or just worn as a mask. Below is the image, weakness, and the mask it drops.

These will show up a little more than the others, but these are a little more dangerous. If you are damaged by these, they may poison you. The poison can hit up to 11 for the first few rounds, so it's pretty dangerous. Antipoisons are very recommended when fighting these, just for precautions.

These are a semi-rare foe to face in this mini-game. These are more wanted than the others because these drop Snake hides. Snake hides can be made into Snakeskin armor, which will be explained later in the guide. These are level 35 and can poison, so watch out.

Last but not least, we have the Jungle spider. These level 44 monsters are notorious for being a pain. When you kill these, they will shrivel up into a Spider carcass. Spider carcasses can be used with skewers and cooked to make a Spider on a stick. It takes 16 cooking to cook these food item, but it's delicious. To get the skewer, you take a thatch spar and use your machete on it.

Spider on a stick:

To get these clothing, you must buy them from Gabooty's Cooperative shop in the middle of the village. You can also buy them from other players. All the clothing has no stat gain, but if you wear pieces or the full set, you will get a larger amount of Trading sticks from talking to the villagers.

This is the shop that uses the Trading sticks as a currency, regular coins will not work here! The shop ranges from clothing to gems. The gems and Gout tuber do not restock. 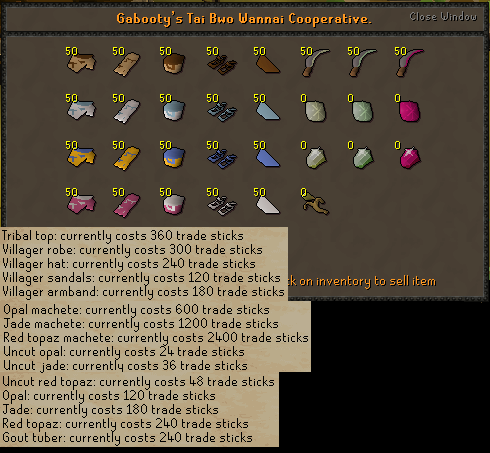 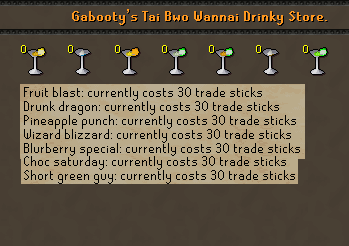 For paying a fee of 100 Trading sticks, Mucaily will let you enter the woods where the Teak and Mahogany trees are. You can talk to him to pay or you can use the quick-pay option by right clicking the door. The logs are used to make planks for POH's or just to light up. There are Jungle Snakes in here and they can poison. There are two iron axe respawns in here, just in case you forgot yours. 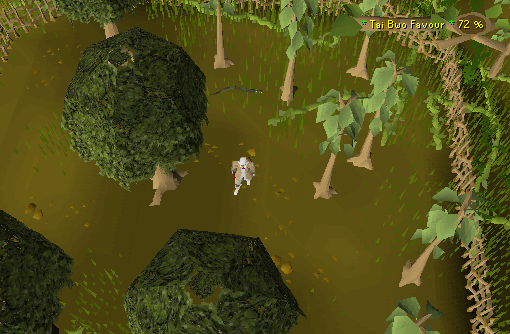 As you are cutting down the jungle, you might come across a Gem rock or a Gout tuber plant.

You will need the pickaxe you brought with you to mine this. If you forgot your pickaxe, you can purchase a bronze one from the general store nearby.

You will need the spade you brought with you to dig this up. If you do not have one, you can purchase one from the general store nearby.

Gout tubers are used during the Karamja section of the Achievement Diary, planted to grow Goutweed, eaten for a few hitpoints and energy gain, or traded to Jatix for unidentified herbs.

That concludes the information in this guide.. for now.