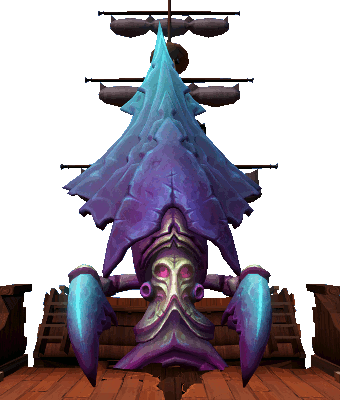 Location:
Open ocean.
Lifepoints:
100000
Max Hit:
1800
Race/Type:
Animal
Examine Information:
A huge, aquatic monster.
100% Drop:
None.
All Possible Loot:
None.
Strategies:
Zogoth is fought on the open ocean when you and the others attempt to face Rabid Jack during Pieces of Hate.

After Rabid Jack kidnaps Rabid Jack, 4 tentacles will appear and pick up your comrades. Each one can be defeated quickly as it only has 201 Life points. After the tentacles are dead, Zogoth's main body will arrive.

The body will be at the back end of the ship while the tentacles will remain closer to the front. If you move too far from the body, the tentacles will appear and randomly smash down on you, causing typless damage; this can be avoided by moving out of the way, but it's easier if you do not need to worry about it. Be aware that Zogoth uses a water jet that can knock you toward the back of the ship; this can also be avoided as it only reaches half of the ship.

Occasionally, Zogoth will spawn Crassian minions that will attack you, there are both Ranged and Melee styles. The Ranged style minion will attack from the front end of the ship. If possible, simply ignore this minion when using Melee as you will need to enter the area where tentacles become aggressive to attack them and it isn't worth the time to kill them. The Melee minion will of course attack more closely and attempt to move you. If necessary, attempt the combat using Magic or Ranged so that you can remove the Ranged minions without entering the tentacle territory.

When Zogoth reaches half and quarter of his total health points, it will shield itself briefly and attack you with acid from above. This will land in a 3X3 area that can be seen by shadows on the ground before it hits. Note that area of effect and damage over time effects can still injure Zogoth even if direct attacks will not work at this time.