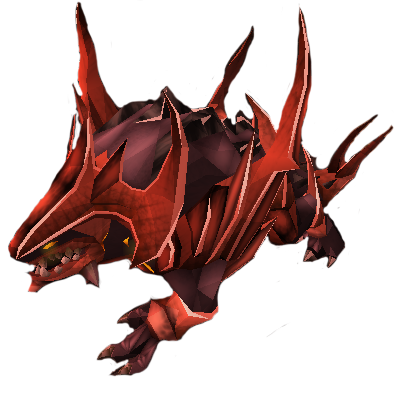 Location:
Wave 63 of the TzHaar Fight Cave.
Lifepoints:
40000
Max Hit:
2240
Race/Type:
Elemental
Examine Information:
This is going to hurt...
100% Drop:
None.
All Possible Loot:
None.
Strategies:
TzTok-Jad is one of the strongest monsters in the game and it is likely that you'll need several attempts to learn how to fight and successfully defeat him. He uses all three styles of combat and each of his attacks can deal massive damage easily capable of killing unprepared or inexperience players in a single hit. However, with practice and the knowledge of how to anticipate these attacks, the fight with Jad can be very straightforward.

There are a number of aspects to the fight that are key to success. Firstly, each of Jad's attacks are signalled by a specific animation that once learned, can allow you to quickly switch your Protection Prayers to block 100% of the damage (Jad is one of only two monsters whose attacks can be fully blocked by Protection Prayers).

Secondly, you can move out of melee range of Jad and he will not follow. This means that he can be maged or ranged from a distance and have his melee attack completely negated, leaving you to focus on just switching between Protect from Magic and Ranged. If done correctly, it is possible to finish the fight without taking a single bit of damage from Jad.

The presence of Yt-HurKot (Jad's healers) can make the fight a bit more challenging, but by following the strategy found here, these shouldn't be a problem.

Upon defeating TzTok-Jad, you'll be awarded a Fire cape and 16064 Tokkul.