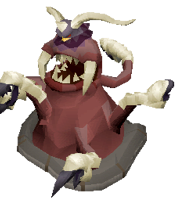 Attacks With:  Ranged and Melee

Location:
During the Dream Mentor quest (the first form).
Lifepoints:
3500
Max Hit:
610
Race/Type:
Animal
Examine Information:
Are you good enough to fight?
100% Drop:
None.
All Possible Loot:
None.
Strategies:
The Inadequacy is the seventh strongest quest monster in RuneScape.

The Inadequacy stikes up in the 200s. Sharks or better are recommended. It spawns many Doubts (Level 78). ignoring these by turning on auto-retaliate off is advised.

When a player is eating with auto-retaliate off, (which is recommended to avoid going for the level 78 Doubts) quickly right click and attack The Inadequacy. Your character will not continue the fight after eating food unless told to do so.

It uses melee, and if players stand out of its melee range, it will use a ranged attack that looks like Shadow Rush. Prayer cannot be used, so using Super set potions is highly recommended. Before attempting to fight this monster, (Only works whilst at full health) drink a Saradomin brew or eat a Rocktail to boost your maximum health temporarily, useful for the fight. If players need to escape during battle, there is a lectern near the edge which will teleport them out of Cyrisus' dream and back to Lunar Isle.

If you have completed Desert Treasure and 68 magic, another method is to use Blood Burst. This method takes advantage of the hordes of Doubts and reduces the amount of food needed, but can be expensive to use. Fighting The Inadequacy is right in the middle of the arena, and in the arena a player cannot use prayer or teleport away. Because it can attack you as you are running away, it is recommended that you run for the exit as you have about 5 food left, so as it is maging you, you will be able to endure the attacks until you get to safety.

Also, using Iban Blast is extremely effective, as it is weak to magic. Most players at the combat level required for the quest lack sufficient Attack level to hit it consistently, as The Inadequacy has very high Defence. A very good strategy is to use a decent shield with splitbark or mystic armour while using Iban Blast. A fully charged Iban's staff will last you the entirety of the battles.

Ancient Magics can be very useful. It is recommended to use the Blood Burst/Barrage spells, as it will cause high damage to both The Inadequacy and Doubts, meaning you have very little eating to do.

This Data was submitted by: VanNess and Jarkur.