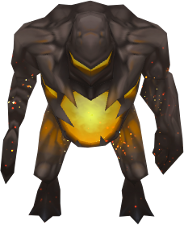 Initially it will be immune to your attacks, so you should move around the room to avoid its Melee attack and watch out for when it launches a ball of energy at you as this cannot be avoided and can hit over 1,000. After a short while, Kipple will detect abyssal energy and create an Abyssal anchor for you to destroy, which will then allow Ariane to destroy a part of its armor.

Once the armor is completely removed after destroying 3 Abyssal anchors, you'll be able to deal half damage and so should start attacking the abyssal while continuing to move around the room. At 75% health, the abyssal will start using a Magic attack which must first charge up (indicated by a blue bar above it), but can hit over 2,000 if you don't move out of the way. It will also occasionally knock you away and stun you momentarily while charging its special attack, so you'll need to move quickly after being stunned to avoid this.

At 20% health, the abyssal will also start using a rapid Ranged attack in addition to its Melee and Magic attacks. You should now just watch your own health and continue moving around the room and attacking until it is defeated.